If transfer rumours in the Daily Mail, The Sun, News of the World, and every other rag out there are to believed*, then the Cristiano Ronaldo to Real Madrid talk is a done deal. It’s time Manchester United supporters started coming to grips with the idea of their fleet-footed, fairy winger donning a shirt with the words “BWIN” on the front and blazing down the wing for a squad known as the…Galácticos? Has anyone ever heard of them before?

But I digress…what I really came for is the opportunity to take a look at four candidates who could all potentially be worthy replacements for Ronaldo.  Sure, we all know United need someone of his calibre to make up for the gaping hole in the starting XI. But they can’t get just anyone with the record £70m United is rumored to be getting from Florentino Perez.

The club needs to find a player that can be a villain and a hero at the same time, whilst scoring 30+ goals and doing a dance of this quality.  Do United supporters really want a new winger that acts like a complete professional on the pitch and is a total dud off it? I think not. What they really need is one of these quality individuals.

But which one has the best chance of filling CRon’s big shoes? Why don’t you follow along and find out… 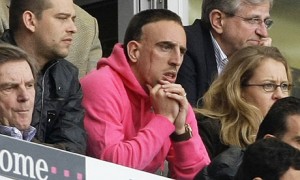 Judging by the above photo, it would be safe to assume that Ol’ Franck has the dress code down to an absolute tee. Pink Ronaldo shirt? Check. The ability to get into the news for all the wrong reasons? Double check. Football ability? Triple check, indeed.

To be honest, Ribery is the perfect fit for Manchester United; but there is just one problem … he doesn’t exactly look like Ronaldo. I’d liken him more to Sloth from the Goonies, and it’s for that reason alone that he gets longer odds than the rest of the competition. Sure, he may be scarier than Martin Skrtel, but those kind of looks will never get you in the British tabloids. 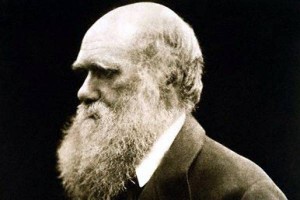 OK, so this is actually a picture of English naturalist Chartles Darwin, but it’s the all I could come up with at the moment of a lad named Darwin (you can thank Google for that).

So why on earth does the voice of Soccerlens’ podcast and the man behind uber-successful United blog, Red Rants, deserve a place on the odds list? Well for one he’s a massive United fan and probably knows as much about the team as Fergie himself, and that could come in handy when Fergie’s spewing venom at him whilst he’s on the pitch.

When Fergie starts flaining his arms about in the waining minutes of a crtical match, Stephen will most certainly know thAT Fergie’s not asking him to move to a narrower position. Nope, he’s asking him to get the hell out of the way so he can see the fit bird that Mr. Darwin is currently blocking.  But Stephen already knew that from his years of watching footage of Fergie and United.

Plus, I recently talked to a source within the club who confirmed they’d watched  Stephen at a recent five-a-side and came away impressed with his ability to emulate the Ronaldo stepover. “It was like watching a three-legged dog sprint across an open field,” gushed the inside source. “It was pure poetry in motion.”

Add to that a love for the club scene and you’ve a potential player that could be splashed across the tabloids on a daily basis! So what’s holding him back? Rumours are swirling that Stephen is unwilling to move from his role up as first team centre back to a spot on the wing. That could prove to be the biggest hurdle of all. 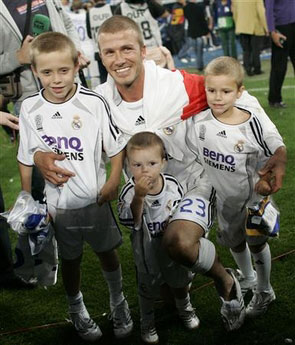 It’s time Fergie went looking for a winger that not only has pace, but actually understands how to make a proper cross as well. Looking at the lack of wingers that can place a ball on the noggin of their striker, it’s obvious to see that the wingers of old are few and far between. So why not go out an sign up the Beckham boys and bring back the original winger!

Golden Balls himself has three strapping lads that could all lace up their boots and play for United at this very moment. Sure, they may be a little small, but they can use their short stature to their advantage by weaving their way through the defence before crossing to the middle of the pitch for Tevez, Rooney, or Berbatov. United supporters will take all three of them if they have even half the crossing ability of their dad.

The only thing holding Fergie back is their constant need for orange slices at the half and the thought that they could all grow up to be just as good as their dad and bolt for the big money when Real Madrid comes calling. 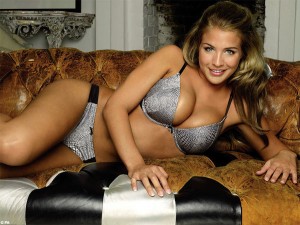 And here’s my pick to take over on the wing for Manchester United next season. Gemma Atkinson is about as fit as they come, and given her history with Cristiano Ronaldo, I don’t think there’s anyone else out there that knows the winger better inside and out (that sentence makes me feel dirty).

So why does Gemma Atikinson get even odds for taking over (beside the fact that she dated Ronaldo)? Well for one she’s from Bury, Greater Manchester, so she does have some local ties to the area. And in this crazy world of international football talents infiltrating the Premier League on an almost constant basis, you’d have to think Fergie would warm to the idea of signing a local to the squad.

Plus, Gemma has the looks — that’s putting it in PG terms for our younger readers — and the age to be a player for years to come! At the age of 24 she’s just coming into the prime of her football career.

I’d imagine more defenders would have a particularly hard time concentrating if they saw her going down the flank with the ball at her feet. My guess is the last thing they’d be looking at is the ball. Deception can be a great thing, and if it takes stunning looks to get the job done, then so be it!

She’s got the local angle going, the looks that will definitely get her on the front page of every sports section in the country, and she has insight into how Ronaldo played the position after dating him during his time at the club. I dare you to find another person out there that has this many things going for them!

So sign her up, Fergie! I for one will be looking forward to seeing Gemma Atkinson in United’s starting XI next season. I’m sure she’ll have the supporters saying “Ronaldo who?” soon enough.

So there you have it! Gemma Atkinson will almost assuredly be Fergie’s best signing this summer. And don’t be surprised if you see the media start running with this story in tomorrow’s paper. After all, they do have an affinity for running with any bit of transfer news that sounds the least bit credible.

(The Cultural Oddsmaker will run on a semi-consistent basis throughout the summer. All odds are meant to be taken in jest until the actually do come true. At that point said writer will retire from the profession and take up the name Nostradamus.)

*Transfer talk in the papers should be considered utter bollocks until the club confirms the transfer. But you already knew that!