Manchester City will be looking to get their 2014-15 UEFA Champions League campaign on track over the next fortnight when they face Russian Premier League champions CSKA Moscow back-to-back.

Manuel Pellegrini’s side have taken just one point from their opening two matches versus Bayern Munich and AS Roma but must fancy his side’s chances of taking a maximum six from a side that have been beaten twice to start their campaign.

Anything less than six points from the Premier League side would certainly leave them in danger of failing to progress into the second round.

The Russian side are hampered in midfield with both Alan Dzagoev and Pontus Wernbloom suspended and Ramus Elm injured.

Samir Nasri is yet to return from injury and Frank Lampard is not expected to play after being stretchered off with a thigh injury on Saturday. 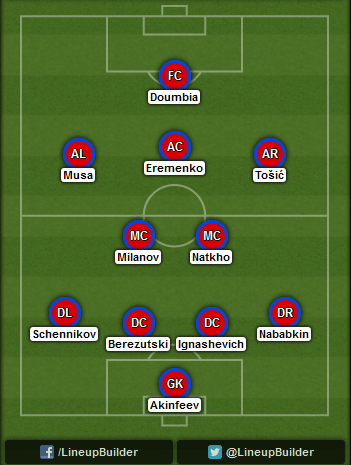 This looks like the way CSKA Moscow will probably line up to face Manchester City. They have four players with at least four league goals already this season. That includes the pacey Ahmed Musa down the left and top scorer Seydou Doumbia up front. Former Manchester United winger Zoran Tošić plays down the right-hand side. 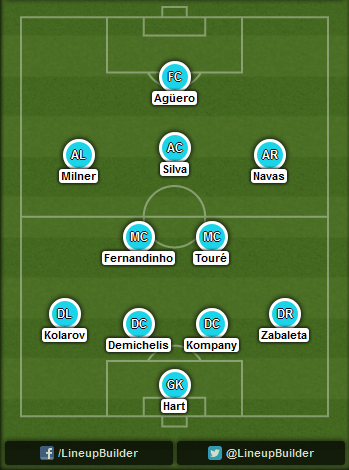 Not too many changes should be needed for Manchester City after thrashing Tottenham 4-1 on Saturday. We’re going with Pablo Zabaleta to start right-back, Aleksandar Kolarov to start left-back and Yaya Touré recalled to the centre of midfield.

David Silva vs Bibras Natkho
Manchester City’s top playmaker can open up just about any defence. David Silva drifts into space, can take on defences and play killer through balls. CSKA Moscow’s holding midfielders need to play close attention to the Spaniard and cannot afford a lapse in concentration if they’re to keep Silva quiet for 90 minutes.

Ahmed Musa vs Pablo Zabaleta
One of CSKA Moscow’s biggest attacking threats comes from down the left wing. Ahmed Musa is a pacey forward with an eye for goal. He scored both of Nigeria’s goals in the World Cup when his side lost 3-2 to Pablo Zabaleta’s Argentina in the group stage. The home side can be expected to see some chances in this game so don’t be surprised if Musa is involved in any of those.

Prediction: CSKA Moscow 0-2 Manchester City
Manchester City certainly haven’t had much luck in Europe with the millions they’ve spent and two Premier League titles behind their back. They really need three points from this game to increase their chances of reaching the round of 16. A match behind closed doors to a team that were thrashed 5-1 by Roma, we believe the English side can come away with three points tonight.