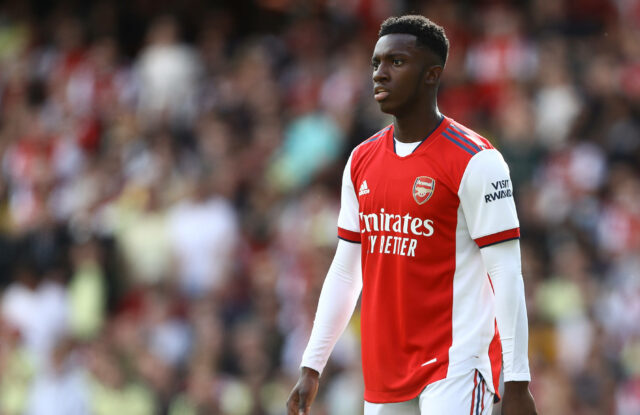 Crystal Palace are ready to make a bid for Arsenal striker Eddie Nketiah before the end of the transfer window, according to The Athletic.

Brighton & Hove Albion wanted to sign the 22-year-old who has only a year left on his present deal.

They wanted Arsenal to include Nketiah as a part of the deal for Ben White, but the Gunners refused as they hope to persuade the young striker to sign a contract extension.

Arsenal have been unsuccessful to date, with Nketiah rejecting their proposal. However, Brighton are unlikely to make a move for him this summer.

Crystal Palace may succeed in getting him, as they have now joined the race.

The Eagles are preparing a bid of around £10 million as Patrick Vieira aims to strengthen his squad.

It is unlikely their offer will be enough to secure the striker’s services, with Arsenal demanding around £20m.

Nketiah scored six times in 29 appearances across all competitions in 2020-21.

He is currently nursing an ankle issue and didn’t play in Arsenal’s first two games this season.

The Gunners have a big decision to make about his future. The club cannot afford to let him go for free, and Palace may feel they can get a deal over the line.