Luis Aragonés decision to leave out Real Madrid captain Raúl is looking even more impetuous after the misery of David Villa’s absence was compounded by Fernando Torres’ withdrawal from the squad with a slight tear in his right thigh muscle.

Torres will be out for at least eight to ten days, which is bad news for Liverpool fans too. The atmosphere surrounding the Spanish camp is one of negativity and bemusement, although the players are claiming internal unity. Aragonés has been involved in numerous incidents with fans over the last few days, the most recent coming yesterday after the plane landed in Aarhus, the coach shouting at a fan “how many European or World Cups have you won?” after being questioned about Raúl’s absence.

In a game which Denmark must win and Spain avoid losing to stand a decent chance of qualification, Aragonés’ selection is very questionable. In addition to Raúl’s absence, the trainer has decided against playing in-form Valencia midfielder David Silva, and has stated that Carles Puyol is not at peak fitness and will therefore not start against the Danes. In the absence of the top strikers, Raúl Tamudo will start just his tenth international match, whilst Aragonés will be hoping that midfield match-winner Andrés Iniesta and in-form Cesc Fabregas take on the goalscoring mantle.

Aragonés is not the only coach dealing with serious losses to injury; Denmark will be without defensive anchor Daniel Agger and midfield linchpin Martin Jorgensen. Denmark will probably start in goal with Sorensen, who can’t even get a game at Villa at the moment, and in-form defensive stalwart Martin Laursen will certainly start (what a difference to have him fit!).

In midfield, Sevilla battler Christian Poulsen will return after his three-match suspension for punching a Swedish defender, and PSV’s Kenneth Pérez, in form for the Dutch club, will deputise for the injured Jorgensen. Alone up front will be Jon Dahl Tomasson; the former Milan and Newcastle striker, who is currently the country’s second-top all time goalscorer with 47 goals, has scored two goals in five games for new club Villareal. Tomasson will be supported by the flank play of Gronkjaer and Rommedahl. 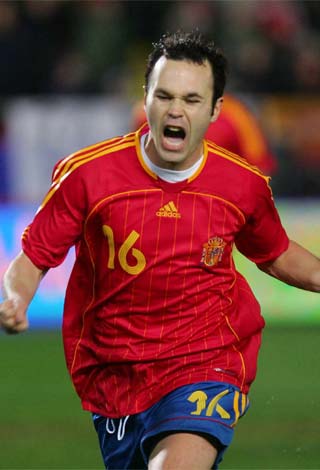 DRAW — in a tense and frustrating game for the Danish (only 28% of Danish fans surveyed last week believed that Denmark could win the game), Spain will nick a draw in the last half an hour after letting in a first-half goal, a result which could theoretically let in Northern Ireland. Star performers for Spain to be Cesc and Iniesta.

Spain U21 win again and await showdown with Russian counterparts

In contrast to the difficulties experienced by the senior team, Spain’s under 21 squad are firing on all cylinders, sitting joint top of the group with three victories from three matches and without having conceded a goal.

The top performers of the game were defenders Torres and Piqué, Atlético Madrid midfielder José Manuel Jurado, whose free-kick opened the scoring and whose all-round play prevented the Poland midfield from ever taking hold of the game, and Barcelona starlet Bojan Krkic, who looked by far the most likely player to score all night, especially with the service of pacy wingers Capel and Sisi.

There was an exciting debut cameo for Athletic Bilbao midfielder Susaeta, whose interchange with Granero led to Bojan’s goal, the second of the match, in the 92nd mind.