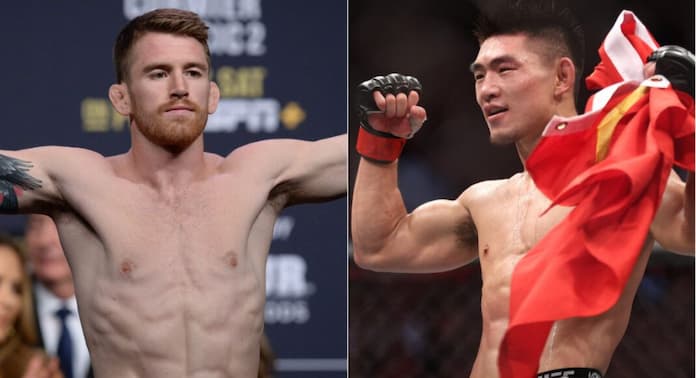 A superb match-up on paper in the 135-pound division as Cory Sandhagen and Song Yadong clash in a high level contender fight. Sandhagen is ranked #4, Song is ranked #10, so the winner here has a real chance of a title shot come 2023. A win here will catapult them towards UFC gold!

On paper, this is a fight that could go either way. On one side of the octagon you have a fierce, fearless, up and coming animal who has had almost 30 fights at the age of just 24. In the other corner you have a man who wants a shot at the title next. Its Sandhagen vs Song at UFC Fight Night 210, in the main event of the evening!

If you fancy a bet on this fight in the UFC bantamweight division, read on and check out our betting tips and predictions, as well as making use of the various free bets and betting offers on this page.

This fight most definitely has potential title implications in the UFC bantamweight division, with the #4 ranked Cory Sandhagen, taking on the #10 ranked Song Yadong.

Despite being the higher ranked fighter, this is probably more make-or-break for Sandhagen. ‘Sandman’ has losses against the likes of Petr Yan, TJ Dillashaw and current bantamweight champion, Aljamain Sterling.

Song on the other hand, could ascend into title contention with a win here, as he hasn’t fought any of the top, top guys before.

Song has a win over the high flying Marlon Vera, which stands him in good stead in the division and a win here would surely catapult him right into the title picture at 135-pounds.

A win here for either man could see a title shot come their way next, but this is the more likely outcome for Song Yadong. ‘The Kung Fu Monkey’ is probably the most successful Chinese fighter in UFC history, and a win here could well solidify both that and his shot at UFC gold next year.

If you look at the resumé of both of these fighters, it is clear to see who has fought the higher level of opposition. As previously mentioned, Sandhagen has been in there with the likes of the champion Sterling, Dillashaw and Yan.

All of these guys are right at the top of the bantamweight tree right now, so it is no disgrace that ‘The Sandman’ has lost to these guys. Alternatively, only one of Song’s losses has come in the UFC, with his other five coming before he was signed to the biggest MMA organisation in the world.

For us here at SportsLens, Sandhagen is more of an all round mixed martial artist than Song is. If it stays on the feet, Sandhagen has the slight edge, and if it goes to the ground too, the American has a venomous ground game which has seen him pick up three submissions inside the UFC octagon.

Song’s only real advantage here is his power. So if he does land on the chin of Sandhagen, don’t be surprised if he stops him. However, that seems unlikely, hence why we are edging towards a Cory Sandhagen victory here on Saturday night at the UFC APEX.

Our Best Bet for this mouth-watering main event from UFC Fight Night 210 is that Cory Sandhagen will win via decision in his fight against Song Yadong. This is priced sensationally with Bovada, who are offering a mouth-watering +180 for this outcome.

As we have alluded to already, for us there are far more ways that Sandhagen can win. If it goes to the ground, Sandhagen has the edge. On the feet, Sandhagen is more well rounded.

The only potential problem we see here for Sandhagen is that Song Yadong is a serious knockout artist. He carries devastating power in both his hands as well a in his kicks, so if the 30-year-old can stay away from his big shots, we can see him winning this one on the judges scorecards.

At the end of the day, Cory Sandhagen is arguably the best bantamweight in the world outside of the top three or four guys. Losing to the likes of Sterling, Yan and Dillashaw is more than acceptable, so being the gatekeeper at bantamweight should be enough for Sandhagen to get the job done here on Saturday night.

Haven’t claimed the Sandhagen vs Song betting offer yet? Don’t worry, take a look at the best betting sites and claim the best bookmaker free bets. Be sure to also check out the best offshore betting sites.

When Is Cory Sandhagen vs Song Yadong?

TV channel: If you have ESPN+ on your TV, you will be able to watch this compelling bantamweight MMA clash from the UFC APEX live on ESPN+, provided you pay your subscription to the channel.

Live stream: ESPN subscribers can also catch the action online and via the ESPN app for free, provided you have access to a phone, tablet or PC.