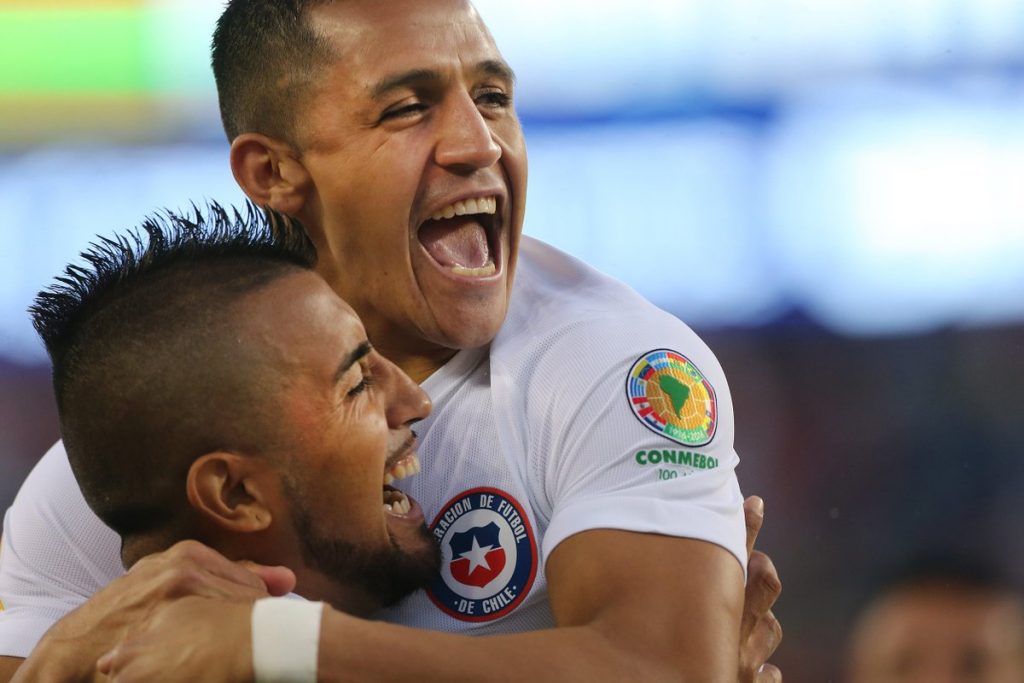 Bayern Munich midfielder Arturo Vidal scored a controversial penalty in the 97th minute of the match to give Chile an important 2-1 victory over Bolivia on Friday.

In the other Group D match, Lionel Messi making a swift from a back injury, scored a superb hat-trick as Argentina thrashed 10-men Panama 5-0 in Chicago.

King Arturo rescues Chile: Great players always step up at big occasions. Just when Chile were crying out for a hero to carry them over the finishing line, King Arturo stepped in for the rescue.

After a goal-less first half, Chile needed to strike early. Vidal opened the scoring in the first minute of the second half after picking up a pass from Mauricio Pinilla and guiding past goalkeeper Carlos Lampe.

It seemed like Bolivia would snatch a valuable point after they restored parity through a sensational goal from Jhasmani Campos’s (more on him later) free kick.

Chile fought till the end and in the eighth minute of the allowed stoppage time, earned a penalty from a questionable handball decision. Vidal stepped up to take the spot and he scored to earn full three points for the defending champions.

The Controversial penalty decision: Deep into the extra time, Alexis Sanchez broke into the Bolivia penalty area and fired in a cross that touched the arm of Luis Alberto Gutierrez, who was trying to block the delivery. This is a normal reaction, which any defender would do, and in normal situations it is not seen as a foul or a penalty, but referee Jair Marrufo had other ideas as he blew his whistle and pointed to the spot. It was a harsh decision, to say the least, and one that cost Bolivia the game, as Vidal converted the penalty to give the defending champions a 2-1 victory.

Bolivia were completely outplayed until Campos stepped up. Minutes after coming on a sub, he stood over a free kick and did this from 30-yards out. Check the goal below.

Messi hat-trick, time to start with Aguero? Lionel Messi came on a sub in the 61st minute and produced a virtuoso performance, scoring a hat-trick in the process. Argentina were brilliant in their opening match against Chile as well, but the natural flair and eye-catching football that we generally associate with them, were missing. With Messi’s arrival, the attacking flair returned to the side as well.

With six points from two games, Argentina have qualified for the quarter-finals. It will allow Tata Martino to relax a bit and make few changes to the team when La Albiceleste take on Bolivia (back Argentina at 4/9 with Ladbrokes to score over 2.5 goals against Bolivia) in their next match. Gonzalo Higuain hasn’t done much in the #9 role so far, and Martino can do no wrong replacing him with Manchester City striker Sergio Aguero up front in the next match.

Who will join Argentina from Group D?

Argentina have already qualified to the next round but who will join them? Chile and Panama both have three points on the table and the winner of the match (back both the teams to score and Chile win at 2/1 per Ladbrokes) will progress to the quarter-finals. If they play out a draw (Chile-Panama to draw at 15/4 with Ladbrokes), Chile will still progress due to their better goal difference than Panama.