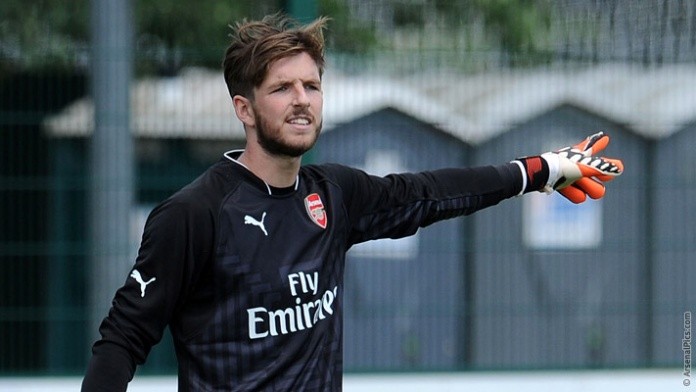 Arsenal have confirmed their youngster goalkeeper Josh Vickers has joined Concord Rangers on-loan for a month on Friday.

The terms of the loan deal are such that the 18-year-old can return to Arsenal and be eligible to play for the Gunners’ academy fixtures. Last season, he was away on-loan with at Canvey Island, where he made 36 appearances.

A statement on Arsenal’s official website read, ” Young goalkeeper Josh Vickers has joined Conference South side Concord Rangers on loan for one month.

“Vickers, 18, will be eligible for the Beachboys’ FA Cup first round fixture away to League Two Mansfield Town on Saturday. The Basildon-born goalkeeper spent the 2013/14 season on loan at Canvey Island, where he made 36 appearances.”

“With the terms of his loan enabling him to return to Arsenal for academy games, Vickers also helped the Gunners to the semi-finals of the FA Youth Cup last season. Everyone at Arsenal wishes Josh well for his time with Concord Rangers,” he added.

The Conference South side currently face injury crisis as both their stoppers Jamie Butler and Joe Wright are on the sidelines and Vickers is likely to start against League Two hosts Mansfield.

“CONCORD have brought in Arsenal Academy keeper Josh Vickers on loan ahead of Saturday’s FA Cup clash at Mansfield Town,” Concord issued a statement on their website.

“The 18-year-old will provide quality cover for injured duo Jamie Butler and Joe Wright. The first round proper tie at Field Mill against League Two hosts Mansfield will be one of the biggest games in Rangers’ history.”