A desperate attempt to get a playoff spot ended just three points short for Columbus in 2007. They won their last two matches, against good opposition in New England and DC United. However, a mediocre start, with just one win in their first eleven matches, caught up to them. Looking back, there are several results in that run that Columbus would love to replay, including a draw with Réal Salt Lake, a loss to Kansas City, who grabbed the last playoff spot, and a draw with Toronto FC.

In the Open Cup, they lost at home to the Los Angeles Galaxy in the third round (their first match) by a score of 1-0. Notable friendlies include a 3-1 loss to Aston Villa and a 9-1 routing of a team of Latin All-Stars (Latinos Unidos). 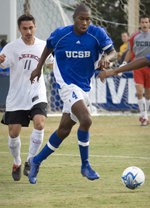 Boca Juniors legend Guillermo Barros Schelotto elevated the Crew’s level of play with his playmaking abilities, but not enough to win a playoff spot. They will need another good season out of him to be successful.

Look to new boy Andy Iro to compete in the back line in his first season as a professional. The Liverpool-born University of California, Santa Barbara graduate should get some playing time, and I think he will be a first-year success story for the Crew.

Columbus needs to find a consistent goalkeeper to anchor the team. Will Hesmer appeared twenty times and Andy Gruenebaum appeared ten times last season, giving up a combined forty-four goals. That’s not terrible, but it’s not good, considering the Crew only scored thirty-nine all season. Which leads me to my next point.

The Crew need a good goal-scorer. Alejandro Moreno, MLS’ all-time goals leader, had a bad season by his standards in 2007, scoring only seven. They need him to start producing, or they need to find somebody who will.