Missing out on a playoff spot and failing to score were the most common themes for the Rapids in 2007. Despite drawing up an agreement to be Arsenal’s American representatives, the Londoners’ magical footballing prowess did not rub off on the Rocky Mountaineers. They finished five points and two places adrift of the last playoff spot, only giving up thirty-four goals, but only scoring twenty-nine in thirty matches.

The US Open Cup started brightly for them, beating Mountain area rivals Réal Salt Lake 2-1, then beating the California Victory of USL-1 (American second division) 3-1, before losing in the quarter finals to the USL-1 champion Seattle Sounders 5-0. The Rapids made a much more successful run in the Cup thanks to goal-scoring that they did not find in the league.

To help with their goal-scoring draught, reports suggest that the Rapids are close to signing current Dunfermline Athletic striker Tam McManus. If they manage to get his signature, he should be able to help provide Colorado with more fire-power up top. 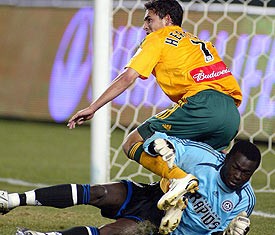 Goalkeeper Bouna Coundoul is the reason the Rapids conceded so few goals, and he will be back for his second stint with Colorado. They will do well to hold on to him, but after a mediocre African Cup of Nations, I’m not sure he will be going anywhere fast.

It’s already been said, but Colorado need to find a way to score. Leading goal-scorer Jovan Kirovski only scored six all season, and four of those were from the penalty spot. So really, Herculez Gomez could be considered their most potent forward, scoring four, all from open play. If McManus does join the team, look for him to score more often and possibly guide the team to a playoff spot. He would have made my key players, but where he will be in the summer is uncertain as I write this.