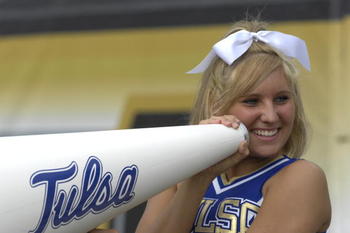 While it may not be the fanciest game on the card this weekend, this Friday night’s game between USF and Tulsa at least gives us our college football fix. The South Florida Bulls take on the Golden Hurricane in a game where the teams have combined for just four wins on the season. At stake is a chance to escape the bottom of the AAC and both teams will be keen to take advantage. Here, we take a look at the odds including the spread and lines while making our best bets and picks for this week 12 NCAAF contest.

In the freezing weather in Tulsa, the bottom two AAC teams will square off on Friday evening. South Florida travels to Tulsa seeking just its second win of the season, while Tulsa will look to defend home turf and break their run of three straight defeats.

The sportsbooks make Tulsa big odds on favorites. They are 13.5-point favorites on the spread according to Bovada and the total points line is set at 58.

USF is on a run of eight straight defeats since they beat Howard early in the season. Meanwhile, Tulsa will start as favorites for the sixth time this season. They have won three of those games outright, but only covered the spread once.

On first glance, it appeared that USF would not have much issue running the ball against this Tulsa defense. They are giving up 4.8 yards per carry and are one of the worst teams in rushing yards allowed per game in college football. However, there is a big worry about this USF offensive line.

Tulsa should have the advantage in that facet of the game and they could prevent any holes from opening and the USF backs could be in for a long night.

There is also the issue of quarterback. USF will be on their third string QB after losing Gerry Bohanon early in the season, and now backup Katravis Marsh is done for the year. Who knows what to expect out of true freshman Byrum Brown.

It is Brown’s first career start and he is a pro-style quarterback who was a three-star recruit out of high school.

Tulsa finally finds the endzone! Braylon Braxton avoids the pressure and hits Keylon Stokes, Stokes breaks a tackle and gets in for the 13 yard TD! #GoldenHurricane pic.twitter.com/zJDPtTJ3kQ

USF is 125th in NCAA football for pass yards allowed per game. It is a perfect spot for Braxton and Stokes to get to work and put up some numbers. Stoke has six games of 100+ receiving yards and six touchdowns on the season so far.

Another big night is in store for the wideout on Friday.