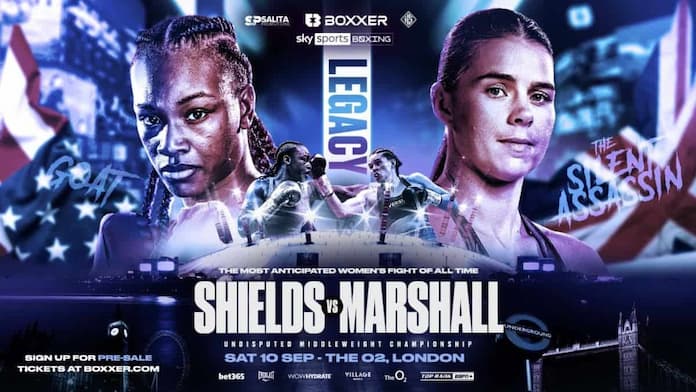 A fight for all of the belts in the women’s middleweight division as Claressa Shields and Savannah Marshall clash for the WBA, WBO, IBF and WBC titles. There has been a lot of needle between the pair in the build up, but the fight is almost upon us and the pair of boxers are ready to go!

On paper, this is a fight that could go either way. It is a genuine 50/50. Both women have impressive wins on their respective resumés, and boxing fans can’t split the pair. Shields only blemish as an amateur or professional was against Marshall at the 2012 World Championships in China, so there is certainly a narrative here for this mega-fight.

If you fancy a bet on this fight in the women’s middleweight division, read on and check out our betting tips and predictions, as well as making use of the various free bets and betting offers on this page.

A ground-breaking event for women’s sport as Savannah Marshall and Claressa Shields headline this fully female fight card from the O2 Arena, London.

The best two ladies in the middleweight division are putting their differences aside and are set to throw down in the ring this weekend, with the winner having lifetime bragging right over the other.

Back in the amateurs, Savannah Marshall was the only person to beat the American superstar, and to this day is still the only boxer to defeat ‘T-Rex’. For Shields, this loss still frustrates her to this day, as she is adamant she didn’t lose the fight.

There has been quite a tense build-up, with there clearly being a dislike between the two female boxers. Both ladies have an identical record, number one versus number two in the world, amateur rivalry revisited – this one is not to be missed!

The co-main event of this spectacular spectacle sees Alycia Baumgardner take on Mikaela Mayer for the IBF, IBO, WBO and WBA world super-featherweight titles. This is a huge fight in it’s own right, and makes this magnificent card even more appealing.

Tokyo 2022 Olympians Lauren Price, who won gold, Karis Artingstall, who won silver and Caroline Dubois all feature on this stellar undercard, having turned over to the professional game in the past 12 months.

This card really is one for the history books, with a main event good enough to headline any boxing event anywhere in world. Without further ado, here are our Claressa Shields vs Savannah Marshall betting tips and best bets.

Our first betting tip is that Savannah Marshall will become the undisputed women’s middleweight champion and defeat Claressa Shields on Saturday night at the O2 Arena.

This fight is so intriguing and has most certainly wet the appetite of boxing fans both in America and across the Atlantic Sea in the UK. Not only is this fight between the two best middleweights on the planet, but arguably two of the best female boxers in any division, pound-for-pound.

Savannah Marshall is the only woman to ever defeat ‘T-Rex’ in the amateurs or the professional ranks, and here at SportsLens we think she could do exactly the same thing again.

Shields is an outstanding boxer, but so is the ‘Silent Assassin’. Marshall is the bigger lady, has a longer reach and can box from both the orthodox and southpaw stance. This will trouble Shields big time, as she will begin to get frustrated.

Whether Marshall wins via stoppage or on points, we think she will get the job done regardless. There are more ways for the 32-year-old to win than the American has ways to win. Marshall carries that power, Shields doesn’t.

If the fight is going the way of the self proclaimed ‘GWOAT’, then the Hartlepool bomber has that equaliser that can change a fight in an instant. The value here for us is to back Savannah Marshall to win.

Our Best Bet for this undisputed middleweight showdown from London this weekend is that Savannah Marshall will beat Claressa Shields on points. This is priced sensationally with Bovada, who are offering a mouth-watering +260 for this outcome.

As we have previously stated, there are more ways in which Marshall can win. She is far more powerful and has shown she can blast girls out of there with her immense power, timing and accuracy.

She has also shown she can box a smart fight, break her opponent down before stopping them, or winning on points. Claressa Shields is a proud woman, and a tough woman too.

Although the general consensus seems to be a Marshall KO/TKO win or Shields on points, we think the former GB Olympian will get the nod on the judges scorecards. We think it could be unanimous as well, if you fancy even better value on Marshall winning after 10×2 minute rounds.

Marshall can box, use her range and frustrate Shields all night long. If she does this, we can see her picking up round after round and winning a close, but ultimately comfortable points decision, to become the unified, undisputed world female middleweight champion.

Haven’t claimed the Shields vs Marshall betting offer yet? Don’t worry, take a look at the best betting sites and claim the best bookmaker free bets. Be sure to also check out the best offshore betting sites.

When Is Claressa Shields vs Savannah Marshall?

TV channel: If you have ESPN+ on your TV, you will be able to watch this compelling middleweight clash live from the O2 Arena on ESPN+, provided you are a subscriber to the channel.

Live stream: ESPN+ subscribers can also catch the action online and via the ESPN app for free, provided you have the app downloaded on your device and are a subscriber to the channel.