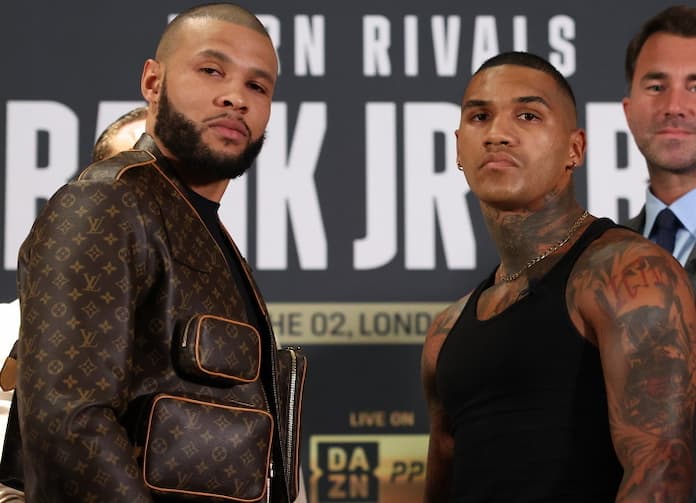 Chris Eubank Jr and Conor Benn clash in a mega-fight billed ‘Born Rivals’ in the capital on Saturday night. The fight is at a 157-pound catchweight, with Benn rising ten-pounds from welterweight for the fight, and Eubank Jr cutting an extra three-pounds down from middleweight.

On paper, this is a fight that could go either way. It is a genuine 50/50. Both warriors have sensational wins on their respective resumés, and have world title aspirations in the next 12 months. Who will come out on top in London this weekend as the Eubank vs Benn fierce rivalry continues?

If you fancy a wager on this historic family rivalry fight, read on and check out our betting picks and predictions, as well as making use of the various free bets and betting offers on this page.

This mammoth catchweight collision between Chris Eubank Jr and Conor Benn has captured the imagination of the boxing world. The Eubank vs Benn family rivalry continues this weekend, with the father’s having fought twice before.

This fight has well and truly got the boxing world talking, with many making a case for Benn causing the upset. On the other hand, a lot of fans believe Eubank Jr will be too big, too strong and too experienced for the undefeated Benn.

It was always going to happen at one stage or another. The two sons are continuing the legacy of their fathers and renewing the family rivalry between the Benn’s and the Eubank’s.

‘Next Gen’ is having to cut an extra three-pounds to make the catchweight limit, with his opponent fighting two weight divisions below. For ‘The Destroyer’ he is stepping up ten-pounds to fight at 157-pounds from welterweight.

The weight discussion is a fascinating one. Will Benn be able to carry his power up? Will the weight cut hinder Eubank Jr’s performance? So many questions will be answered on Saturday night as the pair battle it out in the ring, live on DAZN around the world and on DAZN PPV in the UK and Ireland.

Eubank Jr has some huge wins over the likes of Liam Williams, James Degale and Matvey Korobov. Meanwhile, Benn has defeated some big names such as Chris Algieri, Samuel Vargas and Sebastian Formella.

The fight is truly fascinating. It really could go either way. So without further ado, here are our betting picks and selections for Chris Eubank Jr vs Conor Benn this weekend from the English capital.

Our first betting pick is that Chris Eubank Jr will box a superb fight and defeat Conor Benn Saturday night at the O2 Arena in London, England. How will he do it? Well, for us here at SportsLens, we believe he could do it by stoppage.

Eubank Jr has consistently fought at fringe world level for the past five years or so. The 33-year-old has claimed the IBO title at middleweight, as well as fighting for world honours up at 168-pounds against George Groves in the World Boxing Super Series.

On the flip side, ‘The Destroyer’ has looked highly impressive of late, but has yet to fight someone at world level but has been defeating some big names who are perhaps on the decline.

Although Eubank Jr may struggle to make the weight, if he does and is able to rehydrate up to 167-pounds, he will have far too much for Benn. The Brighton man is over three inches taller than Benn, naturally bigger and stronger, as well as having far more boxing experience at the elite level than his family rival.

Benn will be dangerous for the first half of the fight, but carrying the extra weight will begin to take it’s toll. The 26-year-old has been hurt in the past and dropped by an opponent who is essentially a journeyman, so it is clear to see that Benn can be hurt.

Will the smaller man be able to take the biggest shots of Eubank Jr, who is a hard puncher in his own right and has a 68% knockout ratio? We think Chris Jr will claim yet another win for his family against their bitter rivals in the Benn’s. By knockout too.

Our Best Bet for this humungous super-fight between the families of the Eubank’s and the Benn’s is that ‘Next Gen’ will break ‘The Destroyer’ down and stop him in the middle third of the fight. This is priced sensationally with Bovada, who are offering a mouth-watering +300 for this outcome.

As we have already alluded to, we think Eubank Jr will be able to break Benn down round b round, stopping him at some stage in the fight. When do we think the stoppage will come? For us here at SportsLens, we feel the stoppage could come in Rounds 5-8 for the former IBO world middleweight champion.

The reason for this is because we think Benn will be strong in the opening three or four rounds of the fight, with Eubank Jr being on his guard early on. Then, as Benn begins to tire and can’t put a dent in the World Boxing Super Series semi-finalist, Eubank Jr will systematically break his opponent down and get him out of there.

This fight will be a compelling one from the beginning right until the eventually ending, whenever that may come. The reason we think it could come in the middle third of the fight is because Benn will gas after throwing everything at Eubank Jr early on, but not being able to land his clubbing shots on the chin of the 33-year-old.

If Eubank Jr can withstand the early onslaught from Benn, he can bring into deep waters and eventually drown him. Conor Benn has never been in a fight of this magnitude, whereas Eubank Jr has been in four or five.

The experience, size and strength will tell on Saturday night, with Eubank Jr getting yet another win over the Benn’s for his family.

Haven’t claimed the Eubank Jr vs Benn betting offer yet? Don’t worry, take a look at the best betting sites and claim the best bookmaker free bets. Be sure to also check out the best offshore betting sites.

When Is Chris Eubank Jr vs Conor Benn?

TV channel: If you have DAZN on your TV, you will be able to watch this compelling catchweight clash live from the O2 Arena on DAZN, provided you are a subscriber to the channel and live in the US. UK boxing fans can catch this fight on DAZN PPV.

Live stream: DAZN subscribers in the US can also catch the action online and via the DAZN app, provided you have the app downloaded on your device, are a subscriber to the channel and reside in the United States.