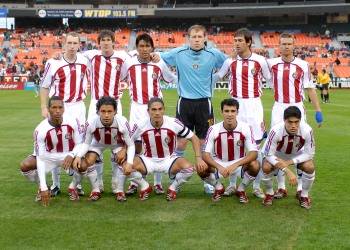 A fantastic season for Chivas ended in frustration. Injuries to leading goal-scorers Maykel Galindo and Ante Razov led to the team scoring just once in their final three matches and not at all in the playoffs. Before losing 1-0 on aggregate to the late surging Kansas City Wizards, Chivas won fifteen, drew eight, and lost seven, winning the top seed in the Western Conference and missing out on the MLS Supporters Shield by just two points.

In the Open Cup, they lost 3-1 to the USL-1 (US second division) champion Seattle Sounders in the third round (their first match). It turned out to be a massive disappointment, considering that they had beaten the same Sounders by the same score just a month before. However, it left them able to concentrate on the league, which they ended up tearing up.

Influential forward Alecko Eskandarian was acquired from Réal Salt Lake. Not really a change to the roster, but Ante Razov should recover from a strained knee ligament in time for the start of the season.

Chivas has several influential players. I have chosen one from each position:

Brad Guzan won the 2007 MLS Goalkeeper of the Year Award. Thirteen clean sheets in twenty-seven matches should be all I need to say.

Jonathan Bornstein has just recently established himself as a regular defender in the US National Team camp under former Chivas coach Bob Bradley and will bring that experience to the club.

Midfielder Sacha Kljestan led the team in assists, with thirteen last season. He also played for the USA in Copa America last summer.

Although they are really two players, Cuban Maykel Galindo and American Ante Razov are such a good forward combination that they deserve to be mentioned together. Galindo scored twelve times for Chivas and Razov scored eleven before they were both injured, destroying Chivas’ title hopes.

If Galindo and Razov manage to stay healthy, the Goats will make another good run for the title. They should contend for the Supporters Shield this season, and the MLS Cup. A decent run in the Open Cup, and talk of a treble (of sorts) will start to circulate.

Chivas have to keep goalkeeper Guzan from moving. He has had trials with Aston Villa and Celtic, but both were unsuccessful. He needs to get more national team experience before he can get a UK work permit, and that is only good for Chivas at the moment.