The Chicago Fire’s 2007 season was very even in all aspects. A goal difference of just about zero (-5) and a 10 win, 10 draw, 10 loss record found them in fourth place in the East and seventh in the league — both right in the middle of the table. They made it to the Conference Final/MLS Cup Semi Final before being ousted by a Taylor Twellman bicycle kick, losing 1-0 to New England.

Their US Open Cup run was short-lived, losing in the third round (their first match) to the Carolina Railhawks of USL-1, the US second division. In their friendlies, they drew with Celtic 1-1 and beat Cracovia Kraków of Poland 1-0. 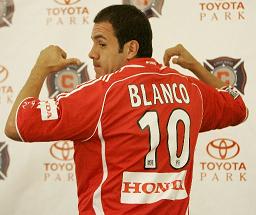 Chicago’s most valuable player from last season, Cuauhtémoc Blanco, will be returning. I was wrong to criticize him in my first article. He led the team with seven assists last season, and fans could always get a kick out of watching him run at opposing defenses.

Blanco will need to have another good season for the Fire to climb out of mid-table obscurity. Mid-table is not such a bad place to be in the MLS; playoff glory and all-season drama for the fans are both possible.

However, qualification for continental competition and Supporters Shields are what a club the size of Chicago need to be aiming for. To do this, Chicago will need to cut down on the number of goals they concede. Dipping into the transfer market for another experienced defender should not be out of the question.