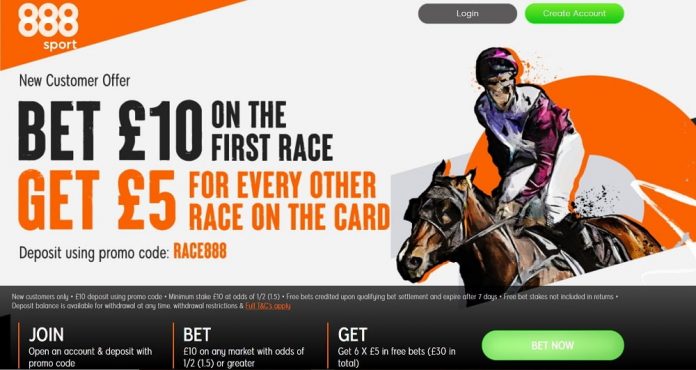 The Cheltenham races New Years Day card on 1 January can give punters plenty of clues for the Festival. It is also an opportunity to ring in the start of 2022 with some horse racing punts. 888Sport run a bet through the card new customer offer when you wager £10 on the first race.

Sign up and deposit using promo code RACE888, then place a qualifying bet on the opening contest (12:15) to receive a £5 free bet on the other six races. That is £30 in total bonuses 888Sport give to those who join. What could be simpler? We’ve even asked our experts for their Cheltenham races New Years Day tips on every single race. Check those out below:

I Am Maximus and Hillcrest both have plenty of upside but, at the weights, Get A Tonic looks the value. Trained by Dan Skelton, this Getaway mare is two from three over hurdles and now steps up in class to Listed level. Get A Tonic won a Point-to-Point in Ireland before joining her current handler and found things happening too quickly in bumpers.

After chasing home Lady Adare on her hurdles bow, she appreciated the step up in trip at Leicester and then followed-up at Uttoxeter. As a mare, Get A Tonic receives a 7lb sex allowance from the geldings in this trial for the Ballymore at the Festival. It gives her every chance of beating them all, according to official ratings.

Back Get A Tonic with 888Sport

Next in our Cheltenham races New Years Day tips is Honest Vic on his handicap chase debut. Trained by Henry Daly, this Kalanisi gelding seems better in larger fields. In his three novice chase outings to date, Honest Vic has only faced three rivals on each occasion. He is also now down to his last winning mark over hurdles.

With 12 runners declared, Honest Vic won’t be involved in a tactical race. The fact that he is 9lb lower in the weights than the rating he started the campaign off also suggests he could be well-handicapped. With Richard Patrick again aboard, Honest Vic looks the one to be on here.

Bet on Honest Vic with 888Sport

Preference is for The Glancing Queen now stepping out of mares company in the extended 2m 4f Dipper Novices Chase against the geldings. Alan King has trained three winners of this race before, so knows what is required. The Glancing Queen has consecutive Listed wins against her own sex but looks well worth a crack at this higher level.

A daughter of Jeremy, she has been crying out for this trip for some time. It was no surprise that she lengthened away from the field in the Lady Godiva at Warwick last time out on her first run over fences at this distance. The Glancing Queen will love the ground and the galloping nature of Cheltenham should suit her, based on her staying on fifth over an extended 2m in the Dawn Run here at the Festival.

Back The Glancing Queen with 888Sport

Many in with chances in the big betting contest but our Cheltenham races New Years Day tips favour Vienna Court each way. Trained locally to the course by Nigel Twiston-Davies, who has saddled three of the last seven winners of the New Years Day Handicap Chase, this Mahler mare bolted up by 11 lengths over course and distance last time out.

Prior to that, Vienna Court was a fine third behind The Glancing Queen at Bangor. Although now 12lb higher in the weights, she sneaks into this extended 2m 4f Grade 3 contest with just 10st 6lb on her back. Many horse racing betting sites including 888Spot pay extra places on this race, so double figure odds appeal.

Back Vienna Court each way with 888Sport

Local trainer Fergal O’Brien saddles two in this contest but Art Approval looks to be progressing as a stayer. He is also the choice of stable jockey Paddy Brennan. This Authorized gelding has won three of his last four starts and goes on all types of going. Art Approval ran a fine fourth over 2m 4f here in October behind Guard Your Dreams and Coole Cody.

More on the winner below in our Cheltenham races New Years Day tips, but the runner-up came out and later landed the December Gold Cup. Art Approval only needed riding out for a 2 3/4 lengths victory at the November Meeting here when last in action. He does have an 8lb rise in his rating but looks well worth a crack again up in trip against a field of older horses.

Bet on Art Approval with 888Sport

The aforementioned Guard Your Dreams has won both of his starts at the track this season, so could surprise a few in the 2m 4f Grade 2 Relkeel Hurdle here. Also trained by Twiston-Davies, this young and improving type faces rivals that lack Cheltenham experience and form. On ratings it may look as those Guard Your Dreams has something to find with the market principals but he acts at this venue.

A gelding by Fame And Glory, he surprised punters when dropping back in trip and landing the International Hurdle here in December. Jockey Sam Twiston-Davies hailed his father as a genius for going down in distance, but this has also been a target. Guard Your Dreams looks value even if the fancy prices have gone because of Indefatigable’s withdrawal.

Back Guard Your Dreams with 888Sport

And finally, the last of our Cheltenham races New Years Day tips is Poetic Music in the Listed 1m 6f Junior Bumper for four-year-olds. One of two trained by O’Brien, the Poet’s Voice filly has won both of her career starts. Each of the second, third and fifth from her debut success at Market Rasen have also come out and scored.

Poetic Music then followed-up at Newbury when much shorter in the market on online betting sites than the 20/1 SP from her bow, proving it was no fluke. Any horse that has won two National Hunt Flat races clearly has ability and she runs here without a penalty. In fact, Poetic Music receives the 7lb fillies allowance from the boys. A hat-trick could well be on the cards.

Bet on Poetic Music with 888Sport 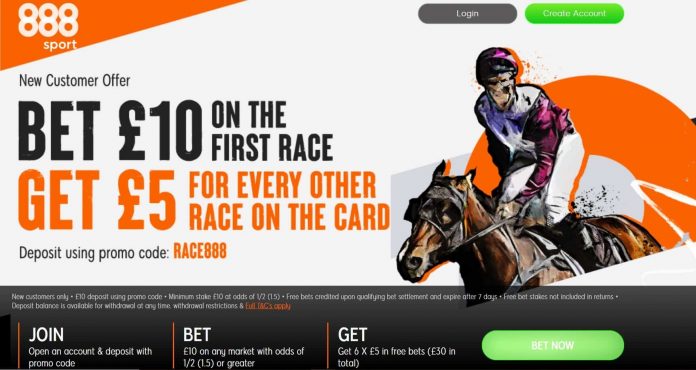 Whether taking our Cheltenham races New Years Day tips or not, 888Sport lets new customers bet through the seven-race card. Deposit at least £10 but method restrictions apply. Don’t use PayPal, Entropay, Paysafe, Neteller or Skrill to fund the account. Remember, stake at least £10 on the opening contest with any win single at minimum odds of 1/2 (1.50).

Only after this bet on the first race has settled will accounts be credited with 6x £5 free bets (£30 in total) for the other six. Stakes not returned with winnings and further T&Cs apply. This is how to get the 888Sport new customer offer for Cheltenham on 1 January in five easy steps: