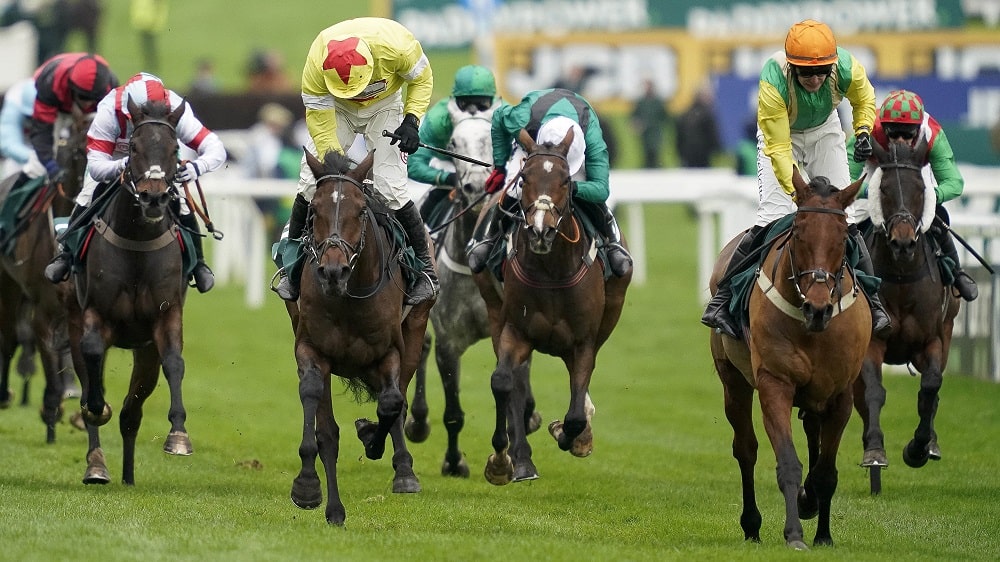 The Cheltenham November Meeting always proves informative for the future, and this year’s edition of the three-day meet at Prestbury Park was no exception. SportsLens horse racing experts were on course at the home of the National Hunt code taking it all in.

It’s just four months until the Cheltenham Festival in March. While punters’ minds mirror those of owners and trainers, there is much to mull over in relation to that from this recent event. Here are five key takeaways from the Cheltenham November Meeting 2021 from our betting pros who were there…

The Fall and Rise and Fall of Skelton

Three of the graded races across the three days went to trainer-jockey brothers Dan and Harry Skelton. Nube Negra and Third Time Lucki put in arguable career-bests when landing the two top 2m events over fences. The former reversed Festival form with an out-of-sorts Put The Kettle On in the Shloer Chase with a six-length victory, while the latter took the old Arkle Trial.

Third Time Lucki was much fresher than his two main market rivals. Both Captain Tom Cat, who didn’t complete, and Mick Pastor had a hard race just seven days beforehand over further in the Rising Stars Novices’ Chase at Wincanton. Team Skelton were beneficiaries of that with Tom Lacey’s rank outsider Sebastopol filling the forecast spot at 25/1.

Nube Negra is now 9/1 to go one better in the Champion Chase than last season with Bet365. Relative veteran Politologue, who made the running, split the winner and Irish raider Put The Kettle On with her unbeaten record at Cheltenham now gone. Nube Negra is now fourth favourite for the Champion Chase. The same firm offer similar odds about Third Time Lucki in the Arkle after consecutive wins over the course and distance.

Back Nube Negra and Third Time Lucki with Bet365

Team Skelton should also be hailed for a remarkable training performance with West Cork, who defied a racecourse absence of 631 days when landing the Greatwood Hurdle – one of the hottest 2m handicaps. Harry Skelton was champion jockey for the first time last season and rode all three. Dropping his whip on the run-in aboard West Cork can be forgiven, but such successes should not overshadow the fact he had as many falls at the Cheltenham November Meeting as winners. 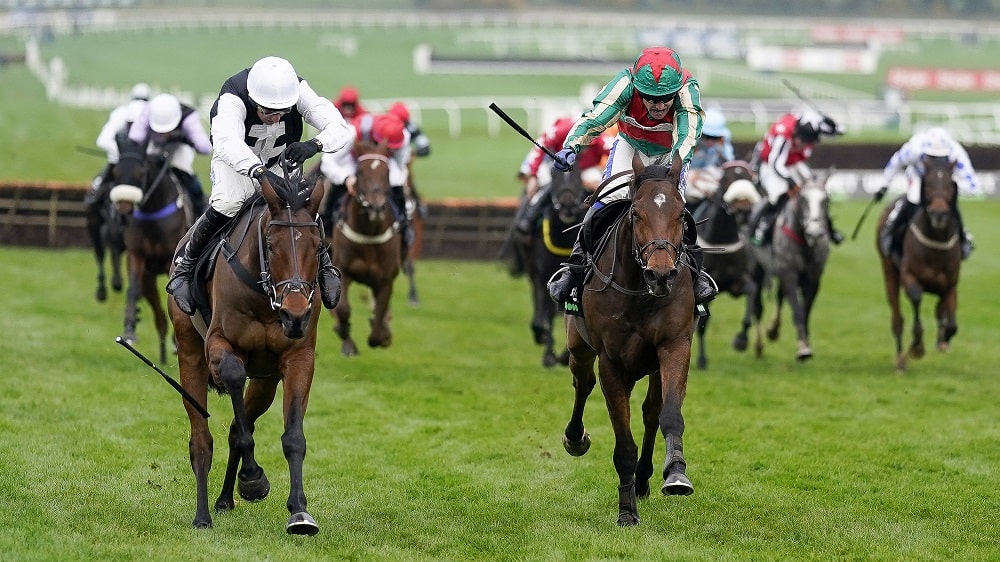 Everyone in that jockeys’ weighing room wants to win, but a daily tumble is a concern. Perhaps chasing debutant My Drogo was unlucky to come down two out on the Friday. Perhaps Skelton should have learned from a similar spill on Shan Blue in the Charlie Hall Chase at Wetherby two weeks earlier. The race, well match, with Gin On Lime very much looked as though the dangers were in front of My Drogo, not alongside him, and so it proved.

Skelton has had a high number of exits from the saddle in recent weeks, an unwelcome trend that continued at Leicester the day after the Cheltenham November Meeting ended. He also unseated from a favourite at Market Rasen the day before it began. Whatever punters make of Skelton and his style of riding, this experience at Prestbury Park encapsulates the highs and lows of jumps racing.

Sporting John May Have Sporting Chance in Stayers

Philip Hobbs endured disappointment with leading Stayers’ Hurdle hope Thyme Hill over in France earlier this month, but may have stumbled on another bullet to fire. Leading Irish owner JP McManus is no stranger to success in the Festival’s top 3m hurdles contest and Sporting John may just have reinvented himself.

Despite top weight on his return over the smaller obstacles, last season’s Scilly Isles Novices’ Chase hero delivered. A big gamble developed on Sporting John, although legendary punter McManus denied he was behind it, who won a Listed handicap at the Cheltenham November Meeting at 9/2. Options now look open for connections, who could go back chasing but must surely be tempted to remain over hurdles.

Leading bookmakers and horse racing betting sites reacted differently to Sporting John, though. William Hill go a top-price 25/1 about him for the Stayers’ Hurdle yet other firms are as short as 14/1. McManus also has last year’s runner-up Sire Du Berlais in the ante-post market at 16/1. That one will be 11 come the next Cheltenham Festival, however, so Sporting John has youth on his side.

Back Sporting John with William Hill

We lost both January fixtures to the elements in the Cotswolds last season, but champion trainer Paul Nicholls ended a 12-month wait for a winner at Prestbury Park during the Cheltenham November Meeting. It’s almost unthinkable that the master of Ditcheat could have such a drought but a treble on the Sunday stopped the barren spell.

Threeunderthrufive reversed Chepstow form with Does He Know in a dramatic 3m novice chase where only those two got round. Undersupervision fell at the third and favourite Oscar Elite took a tumble three out. A tiring Streets Of Doyen, who like the latter ran well when hitting the frame in the Albert Bartlett in March, refused. 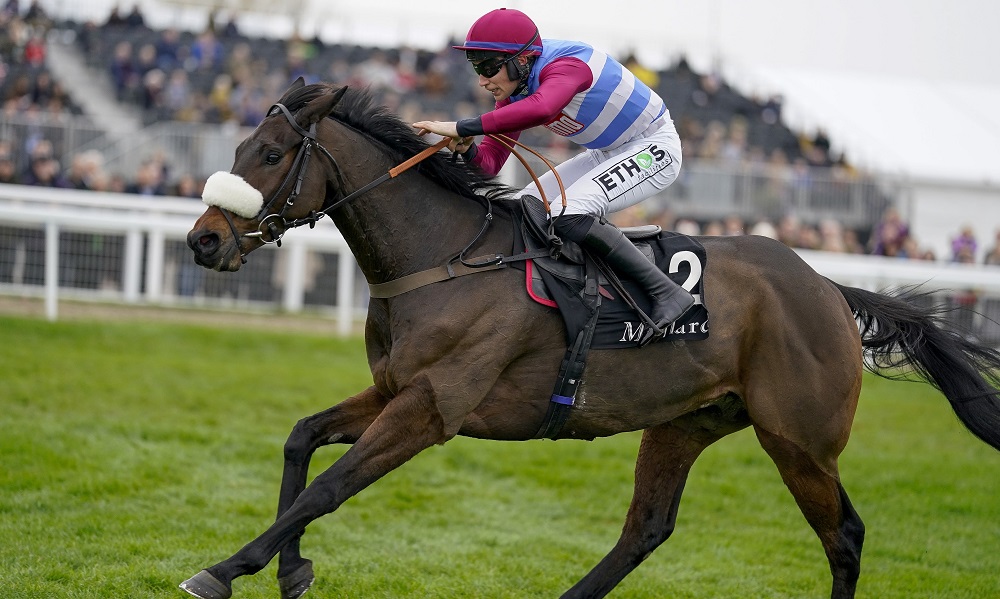 Threeunderthrufive is now 25/1 with Betfred for the Festival Novices’ Chase and 16/1 in the National Hunt Chase betting. Nicholls may face a similar dilemma with which race to aim the McNeil Family owned six-year-old at as he did with Next Destination last season. The stable also has Bravemansgame as a top novice chase prospect.

A vintage Bryony Frost ride on Yala Enki saw him go one better than last year in the 3m 3f Grade 3 handicap chase. The pair bravely made all the running, holding off challenges from Empire De Maulde and The Mighty Don. Another Portman Cup at Taunton should be on Yala Enki’s agenda this winter even if he turns 12 in the New Year.

Nicholls also took the Listed bumper with Timeforatune, who completed a hat-trick despite drifting in the market. When betting opened on Saturday, he was 6/4 yet returned at double those odds. Timeforatune, owned by John Hales, got up towards the finish for a half-length win. William Hill give quotes of 33/1 about the unbeaten five-year-old for the Champion Bumper.

Friday’s feature race at Prestbury Park was the 2m 5f Grade 2 Ballymore Trial. This contest, registered as the Hyde Novices Hurdle, went to Ireland and Charles Byrnes’ Blazing Khal. Like My Drogo above, this horse seems to be named in reference to the popular TV drama Game of Thrones. Blazing Khal was only third favourite in the market on betting sites but followed-up on an eye-catching success at Galway.

He kept on strongly up the hill and held impressive Aintree winner Gelino Bello by 2 1/2 lengths. They pulled five lengths clear of Evan Williams mare Current Mood with the penalised favourite Off Your Rocco back in fourth. Gordon Elliott’s runner was the disappointment of the race when outpaced in-between the last two flights.

The bookies introduced Blazing Khal in both the Ballymore and Albert Bartlett markets off the back of this success. Bet365 are 20/1 about him for the former but 16/1 for the latter Festival assignment. Byrnes will surely have one or other of these events in mind for the son of Black Sam Bellamy. Blazing Khal will likely get a heavy weight in the Coral Cup, which connections have targeted before.

Back Blazing Khal with Bet365

Northern trainers find it tough getting winners at Prestbury Park. Midnight Shadow bucked that trend for Sue Smith when Champ fell in the Dipper Novices’ Chase and profited from similar luck when plundering the Paddy Power Gold Cup here. Those Cheltenham successes are the only two wins this horse has over fences, but he prevailed as last year’s hero Coole Cody came down two out.

First place was worth some £90,000 here. Getting to the winners enclosure came the hard way. Ryan Mania had to pick Midnight Shadow off the turf when down on his nose at the final fence. He then idled up the famous hill and only just held on from the fast finishing favourite Protektorat by three-quarters of a length. Midnight Shadow was all out over this testing 2m 4f.

Smith suggested a crack at the King George VI Chase and step up to 3m at Kempton on Boxing Day could be his next target. Bookmakers’ reaction to that has been lukewarm to say the least. Punters could get 100/1 about Midnight Shadow before the Paddy Power Gold Cup. He is now 50/1 with Betfred for the festive showpiece. While Midnight Shadow has halved in price, there must be some doubts about his stamina.

Back Midnight Shadow with Betfred