Whoever has started this game let me tell you it’s funny. In the Spanish daily Sport on Tuesday, it was published that Jose Mourinho has enquired about Barcelona goal keeper Victor Valdes. 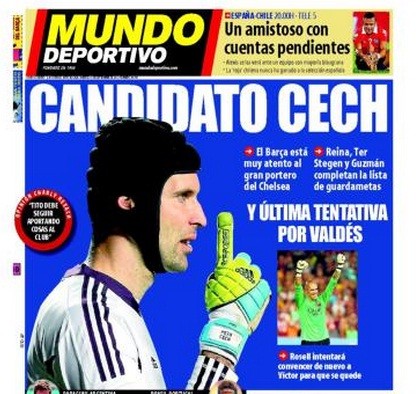 For no reason why, it has been mentioned in the article that Petr Cesch’s future is unclear at Stamford Bridge and that’s why the Portuguese is looking for his replacement.

Valdes, who is almost-certain-unofficially to leave the club after his contract expires in the summer, is reportedly the number one target of the Chelsea manager, as per the report.

Now, here comes the response from the Spanish press. El Mundo Deportivo has featured Petr Cech on their front cover, linking him with La Liga champions Barcelona. It says Cech is Barcelona’s first choice candidate for the post, should Valdes leave the club next summer.

Their argument is, youngster Thibaut Courtois will be more than ready to take the place of Cech for the London giants, which will put him on the market after 2013-14.

FIFA president Sepp Blatter has admitted that awarding the 2022 World Cup to Qatar may well be a mistake made by them and the tournament could be switched to winter to avoid the searing summer heat.

Cristiano Ronaldo will sign a contract extension at Real Madrid, and the formal announcement will be made before the General Assembly on 22nd September.

Nani: Moyes Persuaded me to stay

Manchester United winger Nani, who signed a new five-year-contract at the club, says new manager David Moyes persuaded him to extend his stay.

Read here for the full story

According to Diego Lugano, captain of Uruguay, Luis Suarez is better than CR7, though has put Lionel Messi on top of everyone.

Ramires intends to return to Benfica

Brazilian star Ramires, who left Benfica for Chelsea in 2011, intends to return to the Portuguese club in future. Football is full of surprises he says.

Other stories of the Day

Aguero: City favourite for Title, no chance for Arsenal –The Mirror

That’s all for the day, share your reactions below…