Colombian star Radamel Falcao has hailed Chelsea’s young keeper Thibaut Courtois as the best in the world ahead of Colombia’s international friendly with Belgium.

The 21-year-old keeper was signed by Chelsea from Racing Genk in 2011 but he has yet to play a single game for the Blues, as the Belgian was sent on loan to Atletico Madrid where he has spent three brilliant seasons including the present campaign.

Radamel Falcao has had wonderful time with the Spanish club as well before moving to AS Monaco in the summer. Falcao ahead of the match has ushered heaps of praises for the youngster. He said as quoted in Belgium newspaper Sportwereld: 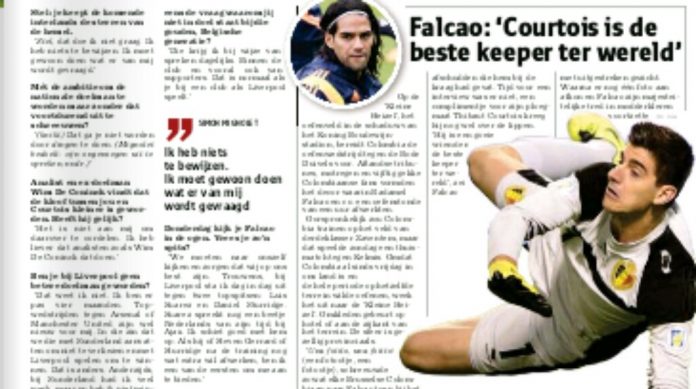 Courtois is highly rated in Spain but the youngster has voiced his concern regarding his situation at Chelsea. Peter Cech is still considered as the no 1 and certainly Jose Mourinho has no plans to dislodge him from that position.

On the other hand Courtois has made it clear that he won’t accept any position on the bench and wouldn’t entertain the idea of playing another year on loan again. It has been reported that the youngster has been proposed a two-year-contract extension to his contract that expires in 2016, but he is seeking assurances from his manager about regular game time, lest he won’t be committing his future for the Blues.