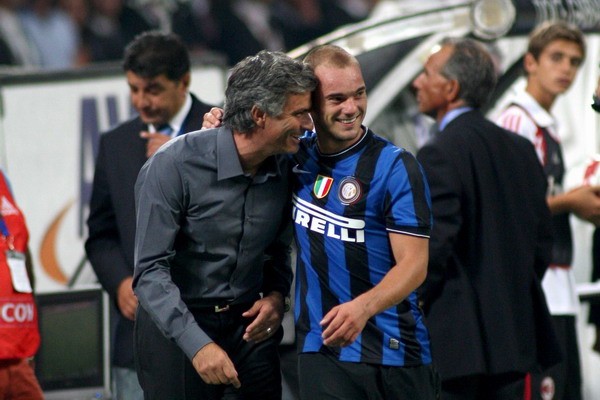 Chelsea are set to meet Wesley Sneijder’s release clause in January according to the Turkish media outlet Fanatik.

Sneijder has won a treble with Jose Mourinho at Inter Milan and the pair admire each other. It is believed that Mourinho is keen to add some attacking depth to his midfield and the experienced Dutchman is an ideal candidate.

Sneijder has been linked with several moves to the Premier League over the years with the likes of Manchester United and Liverpool interested, but the former Real Madrid player ended up in Turkey eventually.

Mourinho is keen to provide him with an escape route by triggering his release clause in January.

Sneijder could be a brilliant alternative for Oscar/Willian and add much needed quality and creativity to Chelsea’s front four. Furthermore, the Dutch midfielder is one of the best free kick takers in world football right now and could add valuable goals/assists from set pieces like Willian.

Sneijder was a crucial player under Mourinho at Inter Milan and the Portuguese is hoping that his former player can help revive Chelsea and turn this season around.

The Blues are in desperate need of attacking players and Sneijder’s experience along with his undoubted quality could be vital.

Time will tell if the report has any truth to it, but for a reasonable price Sneijder would be a very good signing for most Premier League sides.

Sneijder has always been a massive fan of Jose Mourinho and voiced his support towards the former Inter manager earlier this month.

The Galatasaray midfielder stated that Mourinho is the only manager capable of turning Chelsea’s season around.