Chelsea have lodged a formal offer for Manchester United’s unsettled striker Wayne Rooney, but it was rebuffed, as per the exclusive report from The Daily Mail. 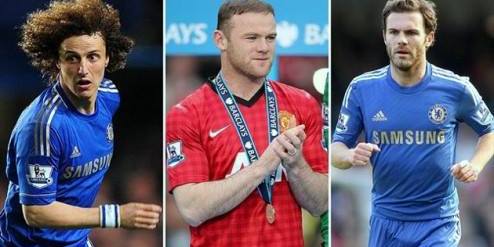 According to the report, the Blues submitted an opening offer of £10 million plus either of David Luiz and Juan Mata, but the Premier League Champions insist that the England international is not for sale.

It is understood that Rooney is “angry” and “confused” with the latest comments made by Manchester United manager David Moyes, who hinted that the former Everton star will play second fiddle to the Dutchman Robin van Persie.

Moyes said: “Overall, my thought on Wayne is that if for any reason we had an injury to Robin van Persie we are going to need him and I want as many options as possible.”

Rooney has re-iterated his desire to leave the club after nine successful years as the English striker feels that he is at his footballing peak and should be playing day in day out as opposed to a bit part role.

Chelsea are in desperate need of a striker this summer and despite targeting several top European forwards like Radamel Falcao, Hulk, Robert Lewandowski and Edinson Cavani, Mourinho has failed to land any one of them so far, and has since then turned his attention towards the England mega-star.

But what is really shocking here is Mourinho’s treatment with two of Chelsea’s best players last season – Juan Mata and David Luiz.

While, Mourinho may have reservations with Luiz’ flamboyant style of defending, but his decision to include the Spaniard in a deal for Rooney, is definitely going to infuriate a major section of the fans.

The situation is complicated by the fact that Rooney is away from the rest of the squad having returned home with a hamstring injury, and now the striker has raised the stakes with his recent comments, there is very little chance of him to stay and continue his career at the Old Trafford club.