Few are surprised by the start Chelsea have made to the 2014-15 season by taking a maximum nine points from their opening three games. Scoring six goals at Everton and conceding three were a surprise though.

José Mourinho’s side are not set up to defend onto 1-0 leads these days, but are capable of scoring at will, as shown by leading the league with 11 goals heading into September.

Tightening up the defence that has allowed four goals in their opening three games may be the Portuguese manager’s number one priority.

Swansea City have made a surprising start to the season in being the only other Premier League side to have maximum points through three games.

Right now the board look like they made the right decision in sacking Michael Laudrup to replace him with Garry Monk. The team have looked tactically sound whilst still looking exciting on the pitch, and getting the results.

They started the season by winning at Old Trafford but this will be Monk’s biggest test to date and one of his biggest throughout the 2014-15 season.

Diego Costa has been suffering with a hamstring injury this week and remains a doubt whether he’ll start this weekend. Loïc Rémy could be in line to make his Chelsea debut if so after the French striker joined from Queens Park Rangers towards the end of the transfer window.

Eden Hazard is a doubt with an Achilles injury. André Schürrle is back after missing the last game. 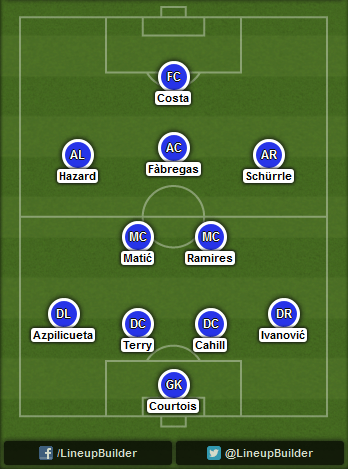 The only change we’ve made from the Chelsea team that won at Everton last time out is to put André Schürrle back in for Willian on the right wing. Don’t be surprised if Oscar replaced Ramires for a more attack-minded team.  It’s possible Diego Costa or Eden Hazard don’t start due to fitness but any other changes would be a surprise. 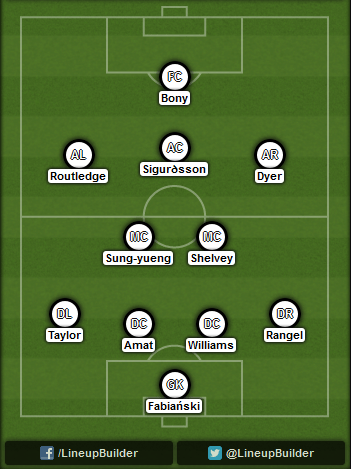 We’re going with the same Swansea lineup that has started their three previous games.

Cesc Fàbregas vs Jonjo Shelvey
Jonjo Shelvey is playing a more defensive role for Swansea City following the return of Gylfi Sigurðsson. Sure, he gets stuck in and wins the ball back but we’re not so confident he’ll be able to keep Cesc Fàbregas quiet on Saturday. The young Englishman also gives away a fare few free kicks that Chelsea could make use with if they’re around the penalty area. Fàbregas has been excellent at the start of his Chelsea career so Shelvey and Swansea will have their work cut out defending the middle of the pitch.

Diego Costa vs Jordi Amat
The Spanish striker has four goals in his first three games for Chelsea. If he’s fit and playing, look for the £32 million summer signing to find space in the penalty area with all his playmakers around him to provide chances. Ashley Williams and Jordi Amat may have made a solid start to the season but we have some question marks over the positioning of the Spanish centre-back which the Blues could easily expose.

André Schürrle and Branislav Ivanović vs Neil Taylor
Chelsea’s right-back has been a key to their scoring spree at the start of the season. Not only has Branislav Ivanović scored two goals himself but his runs down the right wing have led to chances and Chelsea players getting open. Another attacking option, supported by André Schürrle down the right wing, Neil Taylor and his supporting midfielder, expected to be Wayne Routledge, have a tiring task on their hands.  The German winger is quick, has an eye for goal and makes great runs.

Prediction: Chelsea 2-0 Swansea City
Swansea proved difficult to break down for Chelsea towards the end of last season and their good start to this one may see them give José Mourinho’s side a challenge. As Leicester did for an hour last time at Stamford Bridge, we expect Chelsea’s quality to prevail over the full 90 minutes and for them to remain the last team with a 100% record at the end of the weekend.