Chelsea will look to build on their good run of form under Guus Hiddink with a win against Stoke City later today.

The Blues have been beaten twice by Mark Hughes’ side already this season and they will be keen to avenge that. Meanwhile, Stoke City have picked up some momentum after a series of defeats and will be looking to continue their impressive run of form against the Premier League champions.

Both teams have won their last three Premier League games and are chasing a top half finish. It will be interesting to see how Stoke deal with a much improved Chelsea attack, especially without the likes of Ryan Shawcross and Glen Johnson.

Chelsea will also be without they captain and best defender John Terry. The former England international is recovering well and should return against PSG in the Champions League next week.

Radamel Falcao and Kurt Zouma are the only long-term absentees for Chelsea right now.

The likes of Eden Hazard and Kenedy are doubts for the Stoke clash as well. The Brazilian picked up a groin injury after scoring against Norwich and could miss out on today’s game.

Former Barcelona winger Pedro will this the game with an injury he picked up against Southampton as well. The Spaniard is expected to return to action next week.

January signing Pato is fit and should make his home debut today. 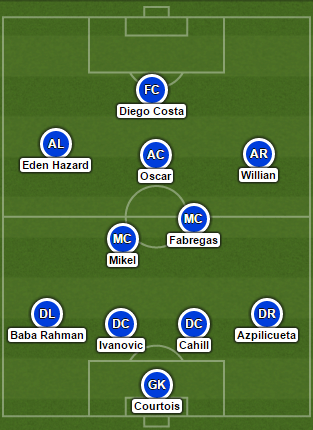