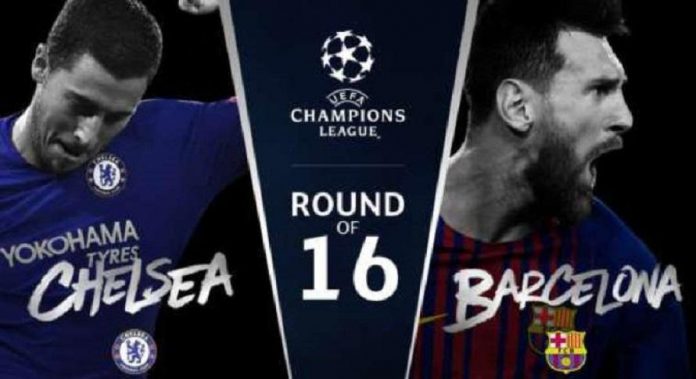 Chelsea host Barcelona in the first leg of the Champions League knockouts this week and the Blues will be looking to secure a comfortable home lead before heading to Spain.

Antonio Conte’s men have recovered from their run of three defeats in four matches with two comfortable wins over WBA and Hull. Furthermore, the Blues have a very good home record against Spanish teams. They have only lost two of the 16 home matches against La Liga teams.

Meanwhile, Barcelona have only lost one game all season and they will be heading into this tie as the favourites. The visitors have kept clean sheets in four of their last five matches and are yet to concede away from home in the Champions League this season.

Chelsea are likely to be without the services of Tiemoue Bakayoko, David Luiz and Ross Barkley for this one.

As for Barcelona, Semedo and Coutinho are ruled out. Coutinho is ineligible after featuring in the group stage for Liverpool and Nélson Semedo is suspended for the away side.

Chelsea have drawn 5 of their last 6 matches against Barcelona in all competitions. Bet on the Blues to secure a draw here.

Barcelona have kept a clean sheet in 6 of their last 7 matches in the Champions League. Bet on under 2.5 goals.

Barcelona are undefeated in their last 7 matches in the Champions League. Bet on the away side to win or draw here.

Chelsea have recovered from their poor form at the right time and this is a huge game for them.

The Blues are out of the title race and are struggling to keep pace in the race for a top-four finish. They will want to do well in the Champions League and the first leg result will be crucial.

This should be a close contest and despite their impressive form this season, Barcelona will struggle to secure a win here. A draw seems more likely.