Chelsea dropped their 100% record last weekend with a 1-1 draw at Manchester City. That was perhaps the toughest fixture on paper for José Mourinho’s side this season and they come out of it with a 4-point lead over their nearest pre-season title contenders Arsenal.

It was the Gunners whom handed Aston Villa their first defeat of the season with a 3-0 thrashing at Villa Park last weekend. Paul Lambert’s side conceded three goals in the space of four minutes after having only conceded one in their first four matches.

Aston Villa head into the weekend in third position, three points behind the league leaders but are heavy underdogs in this match. The Villans lost this game 2-1 with a Branislav Ivanović winner in the final 20 minutes. However, Lambert’s side did win the reverse fixture and last meeting between these two, 1-0 back in March.

Chelsea have a trip to Lisbon on Tuesday for their UEFA Champions League tie with Sporting Club of Portugal. That’s probably no reason for Mourinho to rest players this weekend but should he, there is a wealth of talent available for rotation.

Despite drawing with Schalke in Europe, the Blues are heavily expected to win their Champions League group with Maribor the fourth team in the group.

José Mourinho’s side are continuing on from last season with their good fortune on the injury front with everyone available for selection to the Portuguese manager.

A calf injury has ruled out Ron Vlaar since the international break and the Dutch centre-back isn’t expected to return this weekend. Both Nathan Baker and Ashley Westwood were sorely missed due to illness last weekend – they are available to face Chelsea. Christian Benteke and Libor Kozák have yet to recover from injuries picked up last season. The Belgium striker is back in training at least. 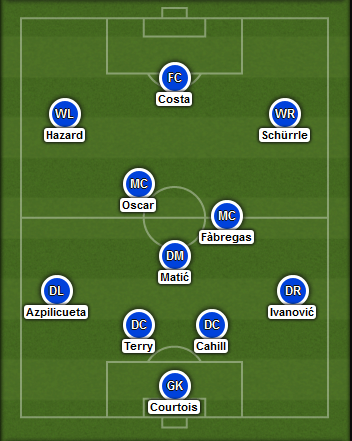 Aston Villa had only conceded one goal in their first four games prior to conceded three in four minutes last weekend. The return of Nathan Baker and Ashley Westwood will strengthen Paul Lambert’s side’s defence. They’re also a threat on the counter-attack. José Mourinho has two formations – either play Oscar as part of a front five or rest him for a more defensive-minded midfielder. We think the Brazilian will play with Cesc Fàbregas as Chelsea look to take the game to Aston Villa by maintaining possession and dictating the game. 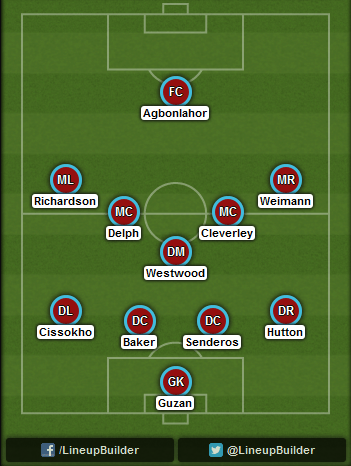 Aston Villa welcome back Nathan Baker and Ashley Westwood and these are the only changes we expect to make from the side that lost at home to Arsenal last weekend.

Cesc Fàbregas vs Ashley Westwood
Ashley Westwood missed last weekend’s defeat to Arsenal through illness and Aston Villa fell apart. Provided the midfielder returns he’s in for a difficult weekend. Cesc Fabregas plays a similar role in which Mesut Özil looked good last Saturday in scoring the opener and setting up the second. The Chelsea playmaker has started the season on fire and can expected to be involved in the goals once again this weekend.

Diego Costa vs Nathan Baker
Nathan Baker is expected to return after missing last weekend with an illness. Otherwise Aston Villa fans have to live in the fear of Ciaran Clark starting again. The Villa defence had been solid up until last weekend when the Irishman returned and played a poor game in conceding three to Arsenal. Even with Baker back, Diego Costa has made a stunning start to his Chelsea career with seven goals in five games. If he’s up against Clark in this match you have to expect the Spaniard to add to his goal tally. If he’s up against Baker don’t be surprise if he scores either.

André Schürrle vs Aly Cissokho
Aston Villa’s left-back had a torrid time last weekend which saw him score a funny own goal before being substituted. Alex Oxlade-Chamberlain had a successful game down the right wing against the former-Liverpool full-back and there’s no reason why Chelsea’s German forward can’t either. André Schürrle offers pace, an eye for goal and great movement that we’d expect to cause the Aston Villa defender a lot of trouble.

Prediction: Chelsea 2-0 Aston Villa
We’re assuming Nathan Baker and Ashley Westwood return for the visiting side. Aston Villa had only allowed one goal in their four games before these two were absent last weekend. Even still, this Chelsea attack has playmakers and goalscorers all across and are capable of breaking down the opposition and winning this game by at least two clear goals.