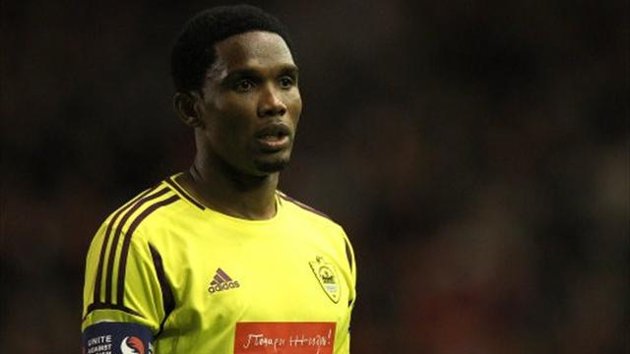 After weeks of rumours and negotiations, Chelsea have finally completed the signing of Anzhi striker Samuel Eto’o on a free transfer.

The Russian Premier League side had previously placed every player on the transfer list as their finances were greatly cut this summer, and subsequently it’s seen a number of high-profile personnel leave the side.

With Eto’o the highest earner at Anzhi, they were keen to let him go so they could rebuild. Their left-sided forward Willian has also recently joined the Blues for around £30M.

Chelsea opted for the Cameroon international after failing to procure the signature of Manchester United forward Wayne Rooney. The London outfit had made numerous bids for the England international, but manager David Moyes made in crystal clear how Rooney wasn’t for sale at any price.

He will sign just a one-year deal with the Europa League winners, as his advancing age would suggest he’s approaching the eve of his career.

Sources close to the player have revealed he’s delighted to be linking up with his former manager from years ago. Jose Mourinho, now of Chelsea, won the treble with the Serie A side, and with Samuel Eto’o with him.

Chelsea have been desperate for a proven goalscorer to join the team, but what will that do for the futures of Fernando Torres, Demba Ba, and Romelu Lukaku?

Mourinho has chopped and changed his strike force in every game so far this season – to no avail. The side were said to have been building for the future this summer, but signing Eto’o would seemingly go against that theory.