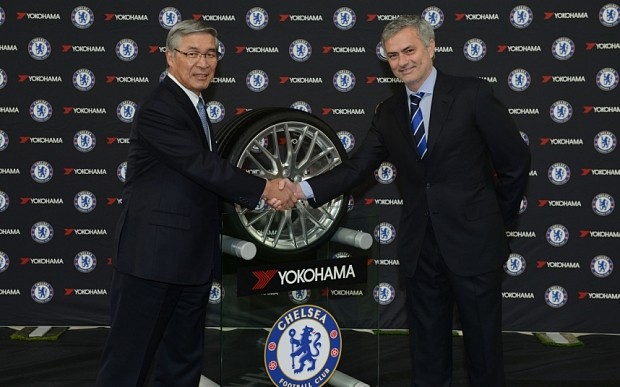 Chelsea Football Club have announced today that they have signed a mega five-year deal with Japanese tire giant The Yokohama Rubber Company to be their official shirt sponsors.

“Chelsea Football Club is delighted to unveil The Yokohama Rubber Company Ltd as our new Official Shirt Partner in our largest-ever commercial deal. This places Chelsea right at the top of European football, with one of the biggest shirt sponsorships ever signed.”

The deal, worth around £40 million per year, is the second highest kit endorsement ever signed in Premier League history, behind the £53 million per year contract signed between Manchester United and Chevrolet.

Chelsea’s contract with Samsung, who have been their official shirt sponsors since 2005, runs out at the end of this season. It was rumoured that Turkish Airlines would be the ones to take over, but Roman Abramovic reportedly wanted more than the £25 million-a-year deal they were offering.

Last season, Chelsea were the most watched Premier League team around the globe, with over 31000 broadcast hours. Chairman Bruce Buck, therefore feels that both the club and Yokohama Rubber have similar objectives and focal points.

‘Chelsea and Yokohama are a perfect fit. Both are global organisations with a focus on performance and innovation, as well as having huge ambition and an unwavering culture of success”, said Buck.

‘We believe that Yokohama will play a key role in helping us drive our global expansion in international markets such as the US, where they have operated with distinction for many years.”

Chelsea on the brink of signing a £40m-a-year shirt sponsorship deal with Yokohama Rubber #CFC pic.twitter.com/9hxbhiurUR

Chelsea have certainly changed their model in the last couple of seasons. Rather than just splashing the cash on the players they want, there is a much more of a self-financing theme to the way they have carried out their transactions.

Players have been bought for big money, but that is against players being sold for big money too. And with this bumper deal in the bag, they should comfortably avoid any non-compliance with UEFA’s Financial Fair Play (FFP) rules.