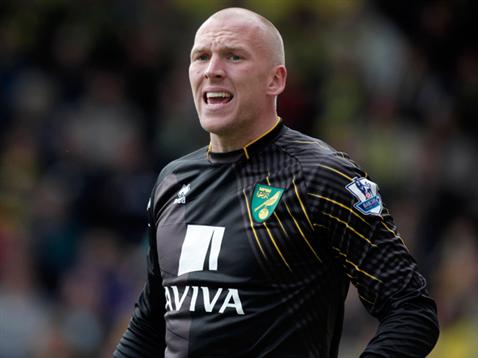 Norwich City goalkeeper John Ruddy is once again the subject of interest for Europa League winners Chelsea. The London side want a back-up goalkeeper for long-serving veteran Petr Cech, and regard Ruddy as the ideal choice.

After having an initial £3M offer for Ruddy rejected by the Canaries, the Blues are said to have upped their bid to procure the 26-year old’s signature.

Chelsea had previously tried to sign former Birmingham City goalkeeper Jack Butland, who rejected them to join Stoke. Celtic’s Fraser Forster was also said to interest the London giants, but a deal failed to materialise.

Due to the homegrown ruling, Chelsea want an English reserve goalkeeper to take up one of the eight ‘homegrown players only’ spots in the 25-man Premier League squad registration that needs to be filled. Any player who trained in England for three years under the age of 21 qualifies as homegrown.

The England international has not long recovered from a hamstring injury suffered in November 2012 which kept Ruddy out for most of the 2012/13 season. He did manage to play in both of Norwich’s last league games for a full 90 minutes.

Ruddy has made a reported 97 appearances for the Canaries in his three years with the side.