Over the last one month, we have seen Chelsea being linked with few Atletico Madrid players like Diego Costa, Filipe Luis and former player Tiago. 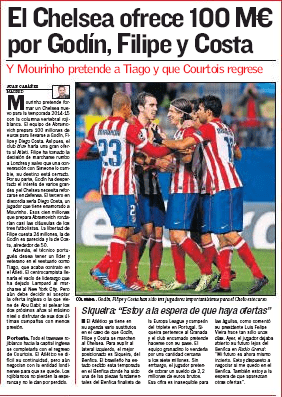 While several reports claimed that the Blues had already agreed a deal for Costa, both sets of clubs are tight lipped about the story.

The Times recently published a story where they claimed the Blues are plotting 50m raid on Atletico Madrid trio of Costa, Luis and Tiago.

However, Spanish daily newspaper AS claims, Jose Mourinho is looking to rebuild for the new season and he sees Atlético’s spine from this season as key and is therefore willing to offer €100m for Godin, Filipe Luis and Diego Costa. The fee would cover the buyout clauses of all three players (around €25m each for Godin and Luis, €50m for Costa).

Luis should be the easiest deal of the three as he has already declared his intention of moving away from Vicente Calderon.

Should Chelsea go for Diego Godin? Share your views