Barcelona winger Alexis Sanchez is close to joining Arsenal in the summer, according to reports from both English and Spanish media.

The 25-year-old Chilean winger, who impressed heavily during the World Cup in Brazil, prefers a move to London, amidst interest from Liverpool and the Gunners are expecting to wrapping up a £30m deal within next week. 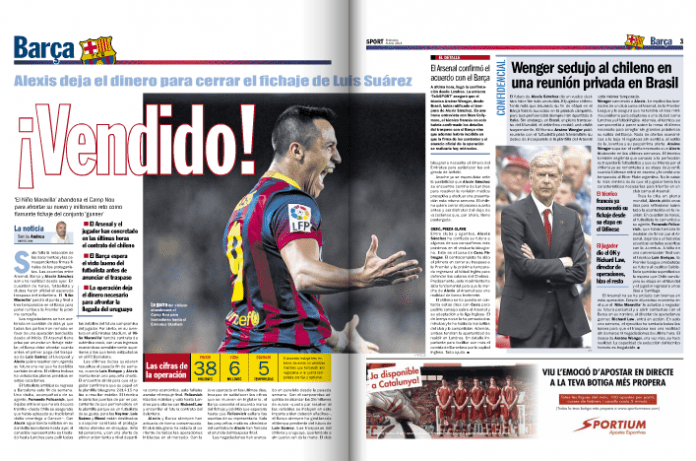 The Times reports today that both the clubs are in advanced negotiations, with Arsenal discussing about the payment schedule for Sanchez. His agent will hold talks in London in the coming days while the player is expected to double the £75,000 a week he earns at the Catalan club.

Catalan newspaper Sport however feels that a deal between the club has already been agreed and the only thing left is the official documents to be signed.

Sanchez doesn’t feature in Luis Enrique’s plans for next season and therefore wanted to move elsewhere to further his career. He apporached Chelsea midfielder Cesc Fabregas, who joined the Blues this summer, for an advice regarding this move, where the former Gunner skipper told him favorable things about Arsenal, which helped him make this decision. Also, Wenger convinced him to join in a secret meeting in Brazil.

What an assist by Cesc Fabregas! Share your reactions…