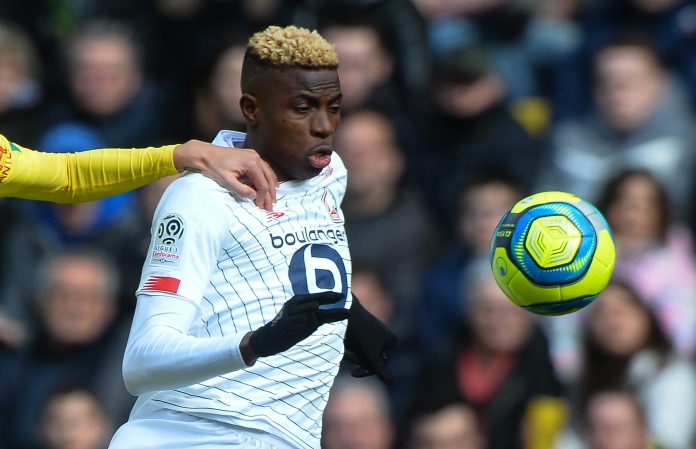 Lille could be set for a huge summer windfall after receiving a huge bid for promising forward Victor Osimhen.

According to Telefoot, an unnamed club has submitted a bumper £75 million offer to the Ligue 1 outfit for the 21-year-old.

Osimhen has been linked with numerous clubs over the past few weeks including Liverpool, Manchester United, Tottenham Hotspur and Leicester City.

However, it is difficult to imagine any of them bidding £75m for a player who probably wouldn’t be a regular in their respective starting XIs.

With that in mind, recent rumours that Chelsea want to sign Osimhen puts them firmly in the frame to be the club in question.

The Blues are in the market for a new striker and the Nigerian fits the profile of the type of player manager Frank Lampard has been targeting.

Osimhen has scored 18 goals in 38 appearances in all competitions this season and his performances have drawn comparisons with former Chelsea star Didier Drogba.

With Chelsea needing to add to their forward options, it is not unreasonable to believe that Stamford Bridge is Osimhen’s most likely destination this summer.

Chelsea star is open to reunion with ‘big friend’ at Tottenham Hotspur.