Chelsea could be the likely destination of Barcelona midfielder Cesc Fabregas, after former club Arsenal turn down their chances to re-sign the Spaniard.

Catalan based newspaper Mundo Deportivo reports today that Barcelona have put €36m price tag on Fabregas as they want to recoup what they spent on him back in the summer of 2011. 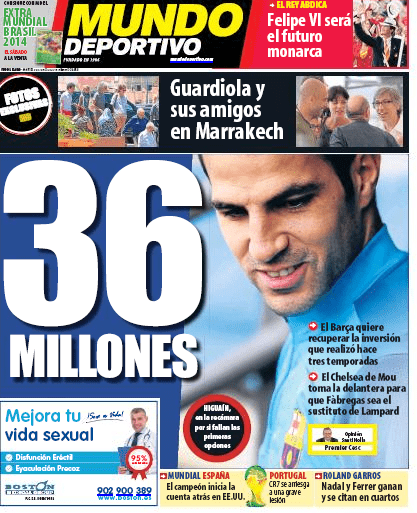 The midfielder’s first preference was to return to his old club Arsenal but he’s not in Arsene Wenger’s plans for next season and his destination now seems likely to be Chelsea, who have offered the player agreeable conditions and might be willing to pay Barcelona’s asking price.

The Guardian reports that Chelsea see Fabregas as an ideal replacement of Frank Lampard, who announced his departure from the London club after spending 13 golden years with the Blues.

Fabregas has not been put for sale though and Barcelona will study offers that match the aforementioned asking price, but they are trying to lure Atletico Madrid midfielder Koke as a potential replacement of the Spaniard.

Several other top Premier League clubs like Manchester United, Manchester City and Liverpool have been linked with a move for Fabregas, but it seems that priorities of all these clubs lie elsewhere at the moment.

Should Chelsea sign Fabregas? Can he fill the boots of club legend Lampard? Share your thoughts below…