Chelsea are expected to be busy in the winter transfer window. The Blues are not only in need of a striker, but they probably will look to bolster their midfield as well.

Frank Lampard is approaching the apogee of the career while John Obi Mikel’s future has come under speculation as well. According to several reports, and we covered here too, Chelsea are looking to bring back their former player Nemanja Matic, who is also a potential transfer target of Manchester United.

The 25-year-old joined the Blues in 2009 but could only make handful of appearances and was sold to Benfica on a swap deal for centre-back David Luiz. Matic has been in terrific form this season and has scored three goals already. 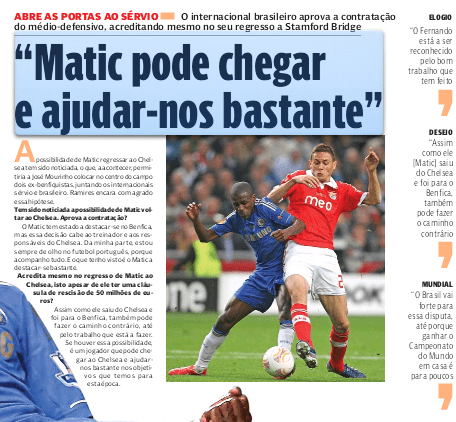 Chelsea midfielder Ramires, who was a former Benfica player, has told Portuguese newspaper O Jogo that he would love to play alongside Matic at Chelsea and feels the Serbian will bolster the squad immensely and help Chelsea achieve their goals in this season.

Matic has a reported release clause of €50m but the Portuguese club could be willing to sell him for much lesser price. Serie A giants Napoli are also interested in him.