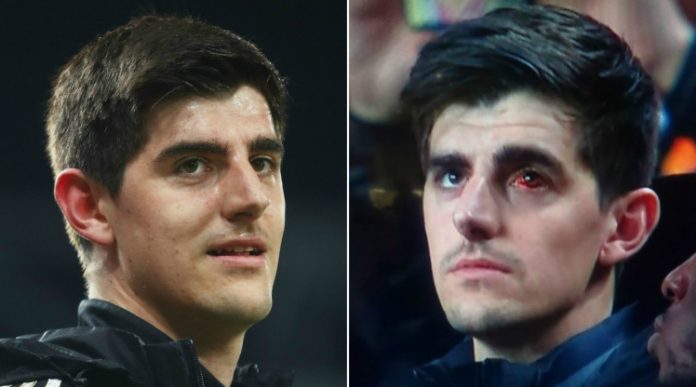 A graphic photograph of Thibaut Courtois’ bloodshot eye (above, right) surfaced last night which left the internet wondering what was up with his eye. Courtois, pictured on the Belgian national team bench, was left out of the starting XI in the 1-1 draw against Netherlands on Wednesday. Liverpool goalkeeper, Simon Mignolet, started in his place.

This begged the question if the problem was a serious one, and if it would affect his availability in the near future for Chelsea. Courtois has, afterall, been the man between the sticks for the Blues in each of their last 5 games, all of which they’ve kept clean sheets in. He may have not been the busiest man on the pitch thanks to the well-drilled and disciplined setup in front of him, but he is an integral figure in the team, nevertheless.

The 24 year old has called for calm using his Twitter account, saying that he has had this problem for a couple of weeks now. He goes on to say that this does not affect his goalkeeping ability at all. This should alleviate the fears and concerns among Chelsea fans.

Everything’s ok with my eye, had it for 2 weeks and doesn’t effect my goalkeeping ???

It remains to be seen if Courtois features in Belgium’s Fifa World Cup qualifier against Estonia on Sunday. He will then return to West London, as Chelsea face a trip to Middlesbrough next weekend before coming up against Tottenham Hotspur and Manchester City in successive weeks.