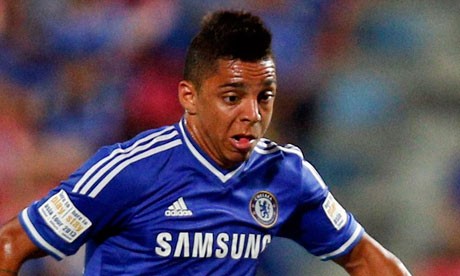 Another Chelsea youngster left the club to join Dutch club Vitesse Arnhem on loan for the rest of the season, the club has confirmed.

Chelsea share a strong relation with Vitesse, with the Dutch team’s owner, Alexander Chigirinsky, is thought to be good friend of Roman Abramovich. Furthermore, plenty of Chelsea players have spent their time over there with four of the current bunch – Bertrand Traoré, Lucas Piazon, Patrick van Aanholt and Christian Atsu – plying trade on loan at the GelreDome at the moment.

Recently, the Dutch Football Federation had launched an investigation into the ownership structure of Vitesse Arnhem, where they feared Chelsea were exercising an undue influence on the Dutch club. Chelsea had dismissed such allegations though refused to comment on it publicly.

The attacking right back will spend the 2014/15 campaign in Netherlands hoping to get opportunity to play regular first team football.

The Brazil Under-20 international joined Chelsea in January 2013 from Fluminese but had spent the last season on loan with Inter Milan.

Chelsea now have sold three defenders in the summer. Brazilian David Luiz has joined PSG in a mammoth £50m deal, while youngster Thomas Kalas has moved to Bundesliga outfit Cologne on a season long loan.