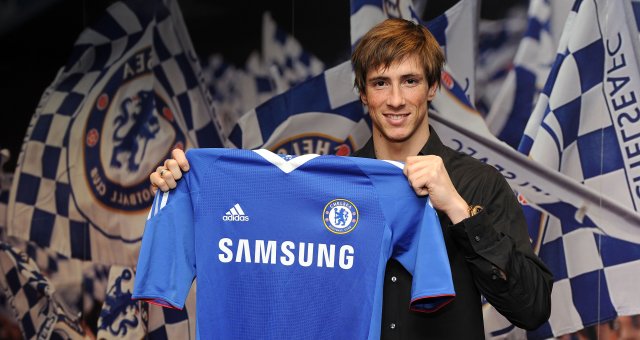 Fernando Torres has finally put pen to paper at Chelsea Football Club for a British transfer record fee of £50million.

Torres who arrives from Liverpool, has put pen to paper on a lucrative five and half year contract and will be available for Sunday’s game, amazingly, against his former club.

The Spanish World Cup winner couldn’t hide his delight at securing the move as he spoke to Chelsea TV at Stamford Bridge minutes after signing on the dotted line.

“I am very happy with my transfer to Chelsea and I am looking forward very much to helping my new team-mates this season and for many years to come.” he told.

“Having played against Chelsea many times since coming to England and in some very big games I will never forget, I know there are many great players here and I will work hard to win a place in the team.”

“I hope I can score some important goals for the supporters to enjoy this season.”

Chelsea chairman Bruce Buck echoed the new player’s delight by underlining the importance of Torres’s capture to the progression of the football club. Buck also believes that The Blues are going to reap the benefits of the player as he enters the prime of his career.

“This is a very significant day for Chelsea, capturing one of the best players in the world with his peak years ahead of him.” he told Chelsea TV.

“We have long admired the talents of a player who is a proven goal-scorer in English football and Fernando’s arrival is a sign of our continuing high ambitions. I hope every Chelsea fan is as excited as I am with this news.”

His transfer ends a four-day saga where Chelsea had initially had a £35million offer turned down on Thursday night before the player handed in a transfer request that was subsequently rejected. Significantly the arrival of Andy Carroll to Merseyside for £35million from Newcastle United paved the way for the Spaniard to move south.

Torres will adorn the number 9 at Chelsea but it remains to be seen if he will make his debut this weekend against his former employers – despite being eligible.