According to Corriere dello Sport, Napoli have rejected a bid from Chelsea, for their star striker Gonzalo Higuain.

The paper also claims that Arsenal and Manchester United are keen admirers of the Argentine striker and could make their move now. 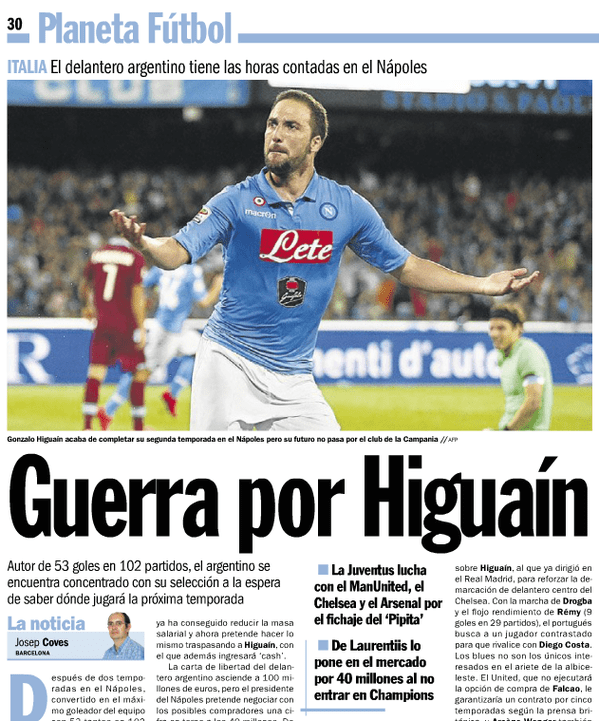 Jose Mourinho is keen to strengthen his attacking options, especially after his side’ struggles last season, with Costa out injured. The Portuguese manager was keen on signing Argentine Mauro Icardi from Inter Milan, but the player signed a new deal last week.

Mourinho has now turned his attention towards Higuain, a player he admires from their time together at Real Madrid.

It is believed that Higuain is open to a move away from Italy and Napoli are keen to sell after missing out on the Champions League.

Higuain would be the perfect addition to Chelsea, considering the way they play. Mourinho’s side lacked a proper goal poacher in the absence of Costa and Higuain’s outstanding finishing ability would be a massive asset to the Blues.

While one could question the lack of game time for Higuain at the Bridge, it is clear that Mourinho likes to play two strikers (Eto’o – Milito/ Gudjohnsen – Drogba/ Higuain – Benzema) if he has the option.

Partnering Costa with Higuain seems like a perfect match on paper and would certainly aid Chelsea in their quest to reclaim the Champions League.

Whether Chelsea come up with an improved offer, remains to be seen. But the deal makes perfect sense for both parties involved. Also it is important to remember that Italians are always willing sellers for the right price.