Chelsea have revealed their new Adidas away kit for the 2014/15 season, with the club making a return to their bold yellow strip, a look surely destined to remind fans of the impending 2014 FIFA World Cup in Brazil this summer. 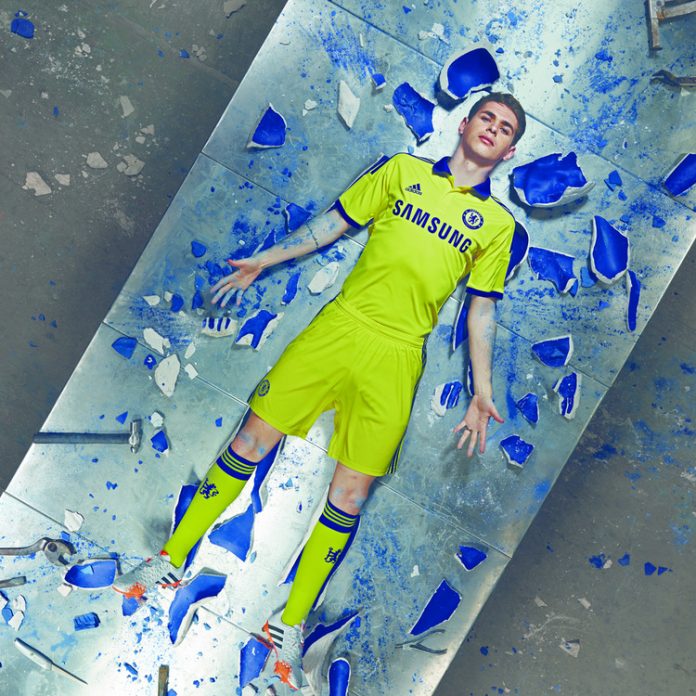 Just over 21 days remain until the start of the summer festivities in South America, and Chelsea’s new yellow away kit, the lightest offering in the club’s history, serves to link to host nation Brazil, with the traditionally yellow samba stars selecting Blues stars David Luiz, Oscar, Ramires and Willian in their squad for the summer tournament.

Adidas’ advertising for the new yellow strip mimics that seen in the ‘Forever Blue’ campaign, with Chelsea stars dramatically emerging from casts in the famous blue strip. Here we see midfielder Oscar, who will be wearing yellow throughout the summer in South America for the host nation, having been smashed free by hammers and tongs, looking rather smug in the vibrant, bold design.

The new shirt features the latest in adiZero lightweight technology, a retro polo-neck collar, as well as an iconic blue stripe across the back, which keeps the club’s primary colour still in the mix.

Chelsea fans will recall Frank Lampard donning the yellow and scoring the winner in the 2009 FA Cup final, as well as the diminutive magician Gianfranco Zola’s frequent outings in it during the 1990s.

The yellow is now very much a part of the club’s tradition, having first appeared during the 1960s.

Check out the gallery below of the new Chelsea away kit 2014/15: