According to the reliable Gianluca Di Marzio website, Chelsea and Arsenal are set to lock horns for Brazilian midfielder Luis Gustavo in the summer. The Wolfsburg midfielder who is set to play a key role for the Selecao in the World Cup in front of the vociferous home faithful is also a transfer target for Italian side Inter Milan. 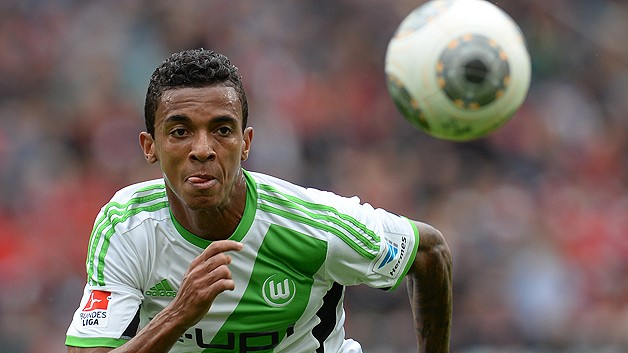 The 26 year old who was sold by Bayern Munich after being deemed surplus to requirements has featured in 29 appearances for Wolfsburg and despite playing in his favoured central defensive midfield role, has scored 4 gaols and grabbed a couple of assists to his credit.

Inter Milan are also after the player and had earlier tried to include one of Ricky Alvarez or Fredy Guarin in the deal for the midfielder but it is believed that Wolfsburg had rejected the offer.

Arsenal are in the search of a an anchorman in the middle of the pitch with Mikel Arteta getting older by each passing day, the Spaniard is being refuted by claims that he is a top four player. Chelsea too would look to bolster their squad in the summer with Frank Lampard being released and John Obi Mikel’s future looking uncertain at Stamford Bridge, Gustavo would ceaselessly fit in the middle of the park alongside Nemanja Matic in Mourinho’s double pivot for the 4-2-3-1 setup.

So what do you think? Who among Chelsea and Arsenal will snap up Gustavo in the summer? Or will the  Brazilian stay at Wolfsburg?