First off, a bit about the match – tribute to Arsenal’s young Gunners for the way they played today – fantastic stuff. Chelsea won at the end, but they were assisted by an offside goal and what Arsenal fans will politely call blood money. It could have been very different had a few shots come off the bar or if the ref (and linesman) had made calls differently, but that’s what we had.

A cracking final – the football was fitting for the grand stage.

Now to the two main incidents. 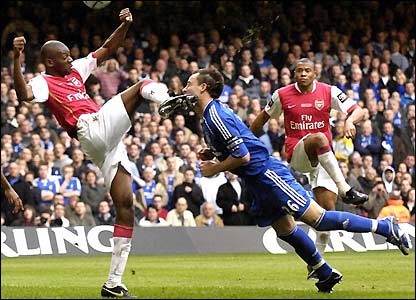 Ouch! Diaby obviously didn’t mean it, he was looking to clear the ball and Terry put his life (yes, his life) on the line to get the 2nd goal, so props to Terry for his commitment and our best wishes to him – I’m sure Arsenal fans will feel the same way. 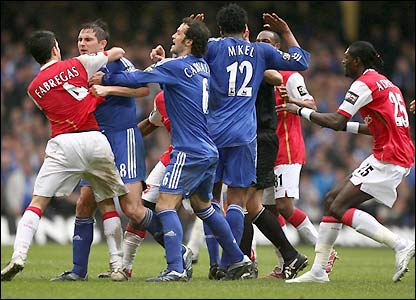 For the life of me, I cannot understand why both Fabregas and Lampard were not shown straight reds. The Toure / Obi Mikel scuffle could have remained just that, a disagreement in which both players would have gotten yellow cards for pushing each other and the game could have gone on.

But Fabregas – hot-headed he certainly is – jumped in, and Lampard – not a calm man himself – tried to wrestle him away, and that really got things messy.

I mean, come on – we’re all grown up and we’ve all been in fights. There’s a football match going on and the last thing you want to do is waste time and get mixed up in something that will cost your team heavily.

Who is to blame? Fabregas or Lampard? I don’t know, because we don’t know yet what’s been said. I’ll update this as things go on, but I stand by my initial view – both players should have been red carded (not sure what Adebayour did though) and Toure and Mikel yellow-carded.

Stupid Arsenal, stupid Chelsea. But the football was good, so not a total waste of time.