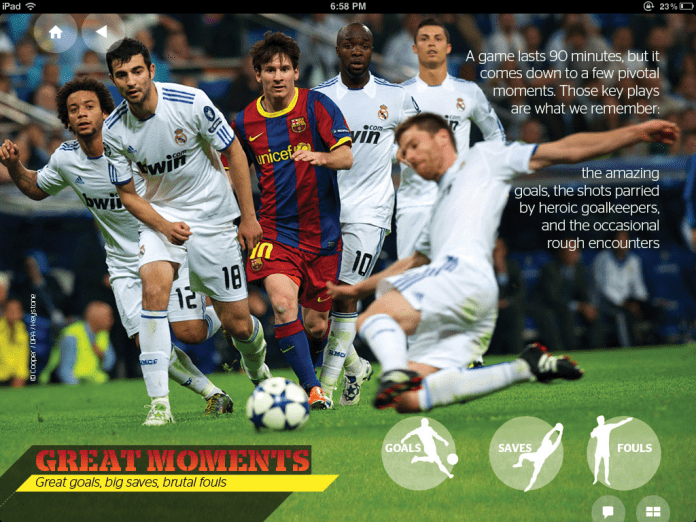 It’s a very cool and timely app as we head into the quarter-finals to watch Madrid and Barcelona negotiate their way to a dream final and the likes of Bayern and Chelsea standing in their way (with due respect to the other four teams, those are the dream semi-finals we’d like to see).

Warning.  This is a highly engaging high-octane app, a little busy at times with the graphics (and takes a few minutes to download at the start).  However, as soon as you got it up and running, you can move quickly and smoothly between the different chapters and options available in this Champions League app. 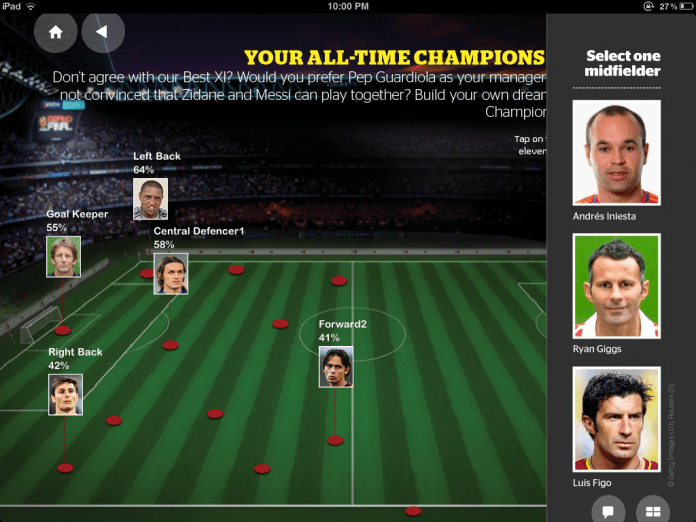 Some of the best features include exploring the top 10 best goals in 3D animation, including some of soccer’s greats, Charles-Edouard Coridon, Zinedine Zidane and Lionel Messi and saves by 10 heroic goalkeepers like Oliver Kahn, Victor Valdes and even Jerzy Dudek whose save was voted the best moment in the Champions League. You can also build your own Champions League dream team, pick from a list of Champions League winners, choose a coach (are you a Mourinho or a Guardiola?) and you can even share your dream Champions League team via Facebook and Twitter.

The content probably is the strongest feature of the app, paired with the animated graphics. The app was developed using extensive input from journalists and interviews with some of the greatest footballers and managers in the game. This Champions League app is the perfect companion for enjoying Champions League matches.

For iPad users, for limited time, catch the app for download via iTunes for only $1.99.

Samsung tablet users can download the app for free via the Samsung Apps store.