With the 2014 Champions League knockout stage quickly approaching, it’s a good time to look at some betting angles to keep in mind when the matches come around in February.

Underperformance Of Away Clubs

Looking back over every Champions League tournament since 1998/99, the under-performance of away clubs in the opening legs of knockout ties caught my eye. By ‘under-performance’ here we mean performance as compared with bookmaker pre-match expectations. 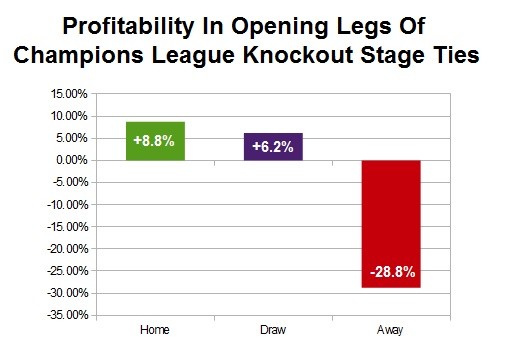 As the chart above shows, away clubs in opening legs have performed very poorly against betting market expectations since the 1998/99 campaign. By profitability here we mean the return on investment had we bet at even stakes across each match. In this case, had you bet £1 on each away club in this situation, a total investment of £170, you would have suffered a loss of just under £49, a return on investment near on -29%. On the other hand, had you backed the draw for £1 in each match, you would have scored a profit of over £10 and had you back the home club, you would have enjoyed a profit of near on £15.

If we look at the performance of away clubs in opening legs season to season, we see that since the 1998/1999 Champions League tournament, there have been four seasons where away clubs were profitable when betting at even stakes. In the remaining eleven seasons, they were well below break even. 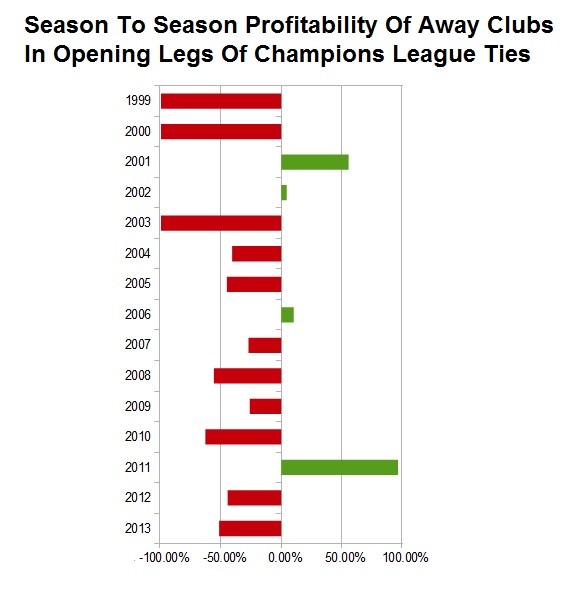 Season 2011 saw away clubs in opening legs dominate, as they delivered an even stakes return on investment of just under +100%, with away clubs winning eight of fourteen matches played including upset wins by Tottenham at AC Milan in the round of 16 and Schalke winning the opening leg of their quarter-final tie with Inter Milan.

How can we explain this overall trend against away clubs? Well we could put it down to home clubs in opening legs being more aggressive than the visitors, who as opposed to the home team may be comfortable to sit back and play for a draw, perhaps collecting a valuable away goal along the way. While the betting market may have assessed each team’s potential for victory under ‘normal’ circumstances correctly, the market may have underestimated the approach each club would bring to the actual match and the dynamics that play a part in Champions League knockout ties. 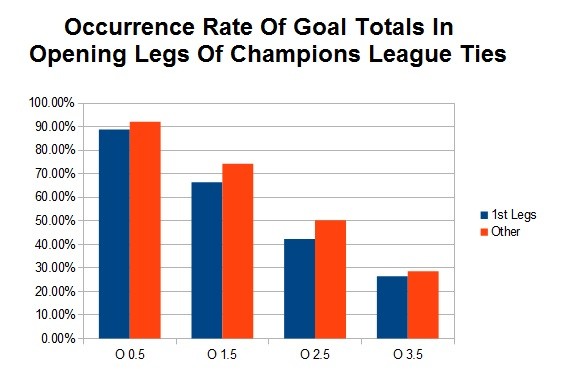 What is interesting here is that while away clubs have under-performed against win-draw-loss market expectations, and opening legs have seen fewer goals scored than average Champions League matches, the total share of goals scored by away clubs in opening legs of 42% is greater than the remaining Champions League matches where it sits at 40%. This gives weight to the belief that away clubs are happy to pinch a goal and play for a low scoring draw rather than take an aggressive approach to the match.

Whether these trends are reflected again in the 14 opening leg matches to be played in the 2014 Champions League knockout stage in the lead up to this season’s final, remains to be seen. But it’s hoped they will offer punters something to consider when placing their bets this season.