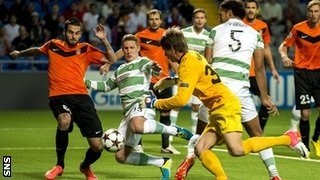 Celtic’s UEFA Champions League group stage hopes have been halted after they lost to Kazakhstani outfit FC Shakter Karagandy 2-0 in the play-offs.

The game showcased poor defending from Celtic, although they dominated most of the game. It gives Lennon’s men a lot of work to do for the second leg at Celtic Park.

FC Shakter will be delighted with the win over the Scottish champions, as they took advantage of Celtic’s wasted opportunities. Celtic need to do alot to secure their place in the Champions League group stages.