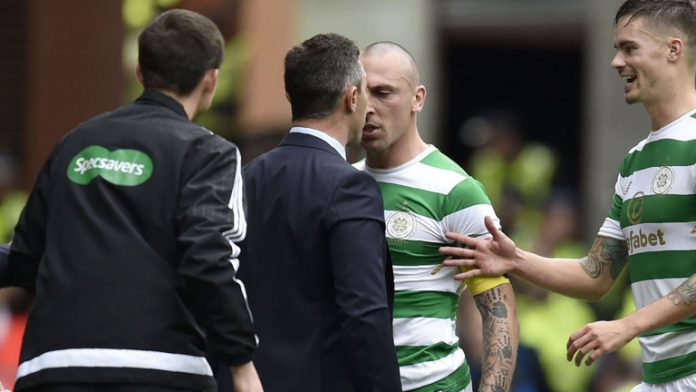 For a player whose limitations were brutally exposed by Paris Saint-Germain in the Champions League, Celtic captain Scott Brown has a lot to say for himself. Too much in fact.

The incident occurred just before half-time, prompting Caixinha to confront Brown as the players left the field.

“I saw an elbow, for a second time in the same place on the same pitch, and nothing happened,” Caixinha said.

“That’s what I’m criticising and I told him: ‘If I’m on the pitch, you’re not coming to put an elbow on my face’.”

Brown’s head-to-head confrontation with the Rangers boss was an embarrassment, with the 32-year-old’s demeanour bearing all the hallmarks of a thug outside a Glasgow kebab shop on a Saturday night. Eyes bulging, veins popping out of his head – thuggery personified.

His subsequent post on Instagram did little to defuse the situation, although his comment was predictably lapped up by some of social media’s less savoury characters.

Brown clearly fancies himself as a top player, but he has a vastly over-inflated opinion of his own worth.

Scotland has historically produced some fine players, with the likes of Kenny Dalglish, Graeme Souness and Gordon Strachan proving themselves on the highest stage.

Brown’s career has never progressed beyond the Scottish Premiership and Saturday’s antics showed everyone why that’s the case.