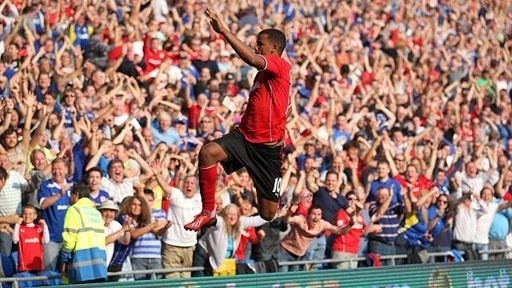 We all love giant-killers. But the triumphant cup wins are slowly losing their inpredictability and spark. The Premier League, however, still surprises us. Not many would’ve predicted this emphatic outcome. And even of the ones that did, not many would’ve been serious.

Cardiff City is the second Welsh team in history to reach the English Premier League, before Swansea City. Many have predicted relegation for the side.

Malky Mackay – A Proud Day For All Cardiff

The rest of the first half was plauged with shot after shot from Cardiff City. Man City were hardly in the game. Joe Hart had to pull off some smart saves to prevent the Welsh side from taking the lead.

Man City took the lead in the early second half, Edin Dzeko firing home an unstoppable shot past the keeper. Ghe goal got the away fans on their feet.

But Cardiff were never to be denied, and less than ten minutes afterwards, Gunnnarsson diverted Joe Hart’s initial save from Fraizer Campbell into the back of the net to level the match!

It was about to get a lot worse for City as Cardiff took the lead. Campbell headed home a towering header with ten to go, and the goal sent the home fans into raptures!

Campbell netted it again with less than five minutes to go to surely end the match!

As Man City fans began to make their way out the stadium, there was a 6 minute injury time confirmed. The away fans then took their seats again.

Negredo found a goal late in stoppage time but it was too little too late as the referee blew his whistle for full-time!

Cardiff beat Man City against all odds to hand them a well deserved three points!