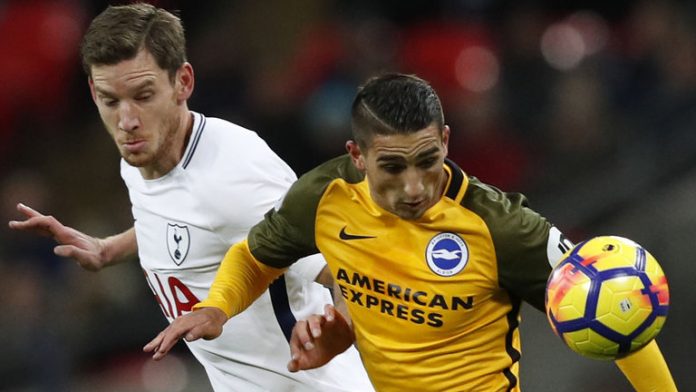 Tottenham Hotspur visit Brighton & Hove on Tuesday aiming to strengthen their grip on a top four place in the Premier League.

Brighton are also on a recovery mission having lost 3-2 at Crystal Palace and although they are 13th in the table they are not totally safe just yet.

Dutch midfielder Davy Propper remains suspended for the Seagulls, while Isiah Brown and Steve Sidwell are both sidelined with long-term injuries.

Serge Aurier and Heung-min Son are expected to return to the Spurs’ starting line-up as manager Mauricio Pochettino shuffles his pack ahead of Saturday’s FA Cup semi-final against Manchester United.

Defender Jan Vertonghen was seen holding his back against City at the weekend, but should be fit enough to play.

Ben Davies will continue at left-back with Danny Rose still struggling with a calf strain, but Kyle Walker-Peters and Harry Winks are definitely ruled out.