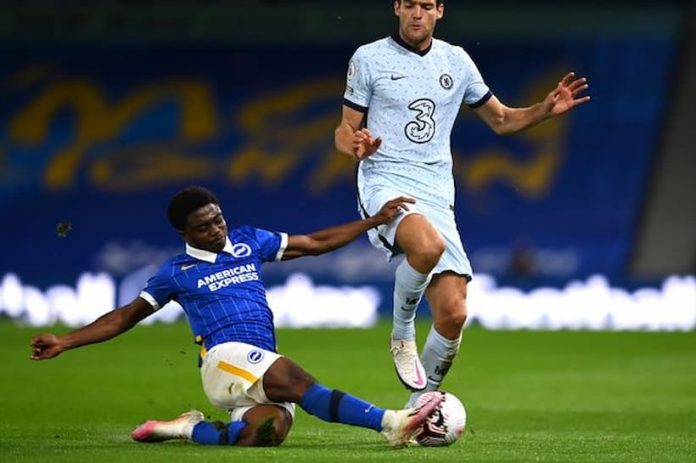 Chelsea will look to put the disappointment of the weekend defeat to Manchester City behind them when they pay Brighton & Hove Albion a visit in tonight’s only televised Premier League game.

Thomas Tuchel’s Blues saw their Premier League hopes all but quashed by a wonder-strike from Kevin de Bruyne on Sunday. But, Chelsea can ill afford to dwell on the result.

Recent form from the Stamford Bridge-based outfit has not been good. So, with the likes of London-rivals Arsenal & Spurs hot on their heels and with games in hand, Chelsea need an away win against in-form Brighton this evening to keep themselves out of the skirmish for UCL places.

For a full match preview, the latest odds at LiveScoreBet, betting tips, and details on a free bet, see below:

Sign up with LiveScoreBet to claim a fantastic welcome offer ahead of the Premier League game: Brighton & Hove Albion vs Chelsea

Brighton & Hove Albion have been a surprise package in the EPL this season to date and find themselves in 9th place in the table with 28 points from 20 games played.

Graham Potter’s team boasts genuine talents in multiple areas of the field. Forward, Neil Maupay has seven Premier League goals to his game and will demand attention from the Chelsea backline. RB Tariq Lamptey has been linked with a move to Manchester United of late such has been his good form, particularly in an attacking sense. And, the likes of CM Alexis McAllister and CB Dan Burn have been putting in top performances, too.

One player who won’t be available for Brighton today is Yves Bissouma, who has been attracting interest from Man U and Liverpool of late. The CDM is away at the AFCON with the Mali national side. However, as good as Bissouma has been, Brighton are yet to lose in his absence and will be confident of getting a result without their star man.

Brighton’s recent form is on par with Chelsea’s. Both sides have picked up three wins, two draws, and suffered one defeat a piece over the last six games. And, another statistic that’s worth mentioning – four of the last five games between the Blues and the Seagulls have ended in draws, with three of those draws yielding BTTS results (for those of you who like a BTTS Acca).

The fact that Chelsea’s recent run of form is on par with that of 9th place Brighton tells you all you need to know about the Blues faltering title bid. The early season optimism has been chiseled away. £90m forward Romelu Lukaku is unhappy and playing as such. And, the Chelsea defense that began the year in such tremendous form has only kept one clean sheet in its last 10 EPL matches.

All in all, this game definitely has the feel of a potential banana skin for the European champions. Brighton have already snatched a 1-1 draw at the Bridge this season. Potter’s team is also unbeaten in five games and has lost just three times at the Amex to date.

If Chelsea are at anything less than their best, or if heads are still down after the City result, expect to see the Seagulls swoop in and peck at the carcass.

Brighton vs Chelsea prediction: Get Brighton to win at 4/1 with LiveScoreBet

If you’d like to take a look at the latest team news and learn more about a Brighton vs Chelsea live stream, click the link.

There are also a host of Brighton vs Chelsea betting offers available for this game, click here to find out more.

As stated, Brighton is unlikely to be an easy out for Chelsea. Tuchel’s side seems a bit low on confidence at the moment and have really struggled in the absence of England international wingbacks, Ben Chilwell and Reese James. The pair combine to provide such great natural width and attacking impetus for the Blues when fit.

The aforementioned recent results between these sides (four draws in five) is also a solid indicator of a closely fought contest down on the British coast later this evening. We really feel like there could be a result here for the Gulls.

At LiveScoreBet, it’s possible to cover two out of the three possible result outcomes by wagering on Brighton & Hove Albion to win or draw at odds of 23/20, meaning that a £10 wager pays out £21.50.

Brighton vs Chelsea betting tip: Bet on Brighton to win or draw at 23/20 –  with LiveScoreBet

Brighton to win @ 4/1 with LiveScoreBet

Chelsea to win @ 8/11 with LiveScoreBet

LiveScoreBet is offering every new customer £20 in Free Bet Credits. To claim yours, just sign up and place a qualifying bet of £10 on today’s match between Brighton & Chelsea in the English Premier League.