Newcastle striker Obafemi Martins recently announced that next season, Newcastle United were capable of challenging for the Premiership title, a Champions League berth and would also target the two domestic cups.

While football hacks everywhere choked on their morning tea before gleefully sputtering and furiously typing-up a witty, utterly tosh piece on Newcastle and Martins, we at Soccerlens saw the light and thought that no, we should wait (the fact that we saw it ‘late’ was also an important factor in this decision).

Why wait? To find proof, of course. Proof that Martins was completely motherfuckin’ stoned when he gave this interview.

I present to you Exhibit A, Martins’ comments.

Exhibit A: Obafemi Martins’ comments to the press:

“Where can Newcastle aim to be next season? Fight for the league title, play for a UEFA Champions League place and also target the FA and Carling Cups.

We have the players, manager and fans to make it happen and I really think we can do it. Losing Owen and Shola was a terrible setback.

But their return couldn’t come at a better time. I think we’ll form a great team.”

Clearly, the man has vastly over-estimated the players (his Newcastle teammates), the manager (Glenn Roeder) and the fans (you). It also appears that he’s over-estimated the impact of Shola Ameobi and Michael Owen returning to the squad after a season out because of injury (and in Owen’s case, 2 seasons).

But most of all, Martins has apparently let the 0-0 home draw against Arsenal and Chelsea (not to mention the 2-2 draw against Manchester United) go to his head and is now placing Newcastle above Arsenal (no where in the title race, hanging on for dear life to their Champions League spot).

At first I thought, half-jokingly, that Martins must be high – after all, no matter how optimistic you get, you cannot seriously consider Newcastle United to be title contenders on a single front, let alone all four. The redundancy of fighting for a Champions League place while simultaneously fighting for the league title was my second clue – he most definitely was on drugs.

First I thought he was on Sativa, but then again, hey, these are rich blokes who earn more in a week than I could possibly earn in an year. After going through mountains of hash (yes bud, I know, we’re getting there), they MUST want something better.

So I went a huntin’ for the vices of the rich and famous.

And thus I present to you Exhibit B.

Exhibit B: Vices of the rich and famous 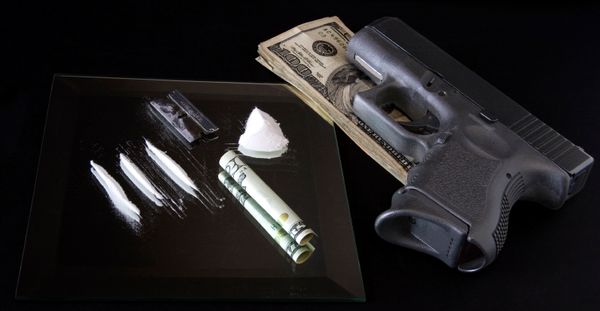 You’ll notice that rich people have certain common characteristics – they have a need for protection (hence the guns), they have access to anything, legal or illegal (thanks to the money) and because they don’t need to work for money, they spend their time entertaining themselves (and others) – hence the cocaine.

For a fleeting second I had a Lord of War Zen moment and I thought Martins was sniffing gunpowder, but … naaah, he’s not talking THAT crazy yet.

Speaking of Lord of War – absolutely love the movie. You must see it.

So he’s not too crazy, but he’s rich enough to buy enough coke for himself and his country (that’s the general idea, no?). 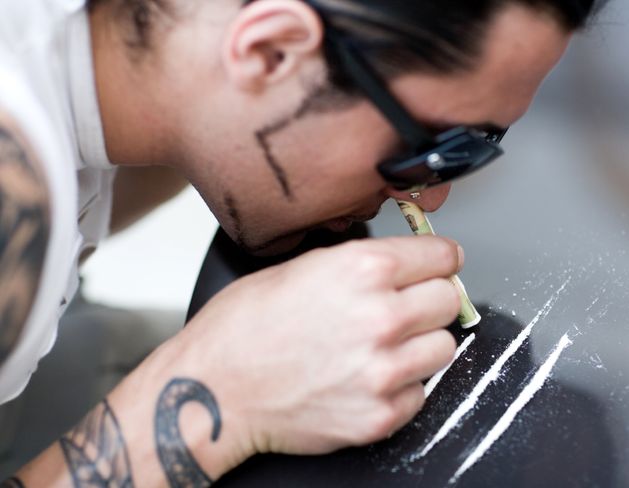 We don’t know if this player is addicted, whether he is a habitual user or whether Robbie Fowler got him to do this at a party as a gag (good ol’ Robbie, eh?). We also don’t know if he ‘trades’ in guns and drugs, although if he does, here’s a free banner for him:

What we DO know is that Martins’ crazy claim can only have come from one source – him snorting cocaine.

The only question I have is – how does it feel to do these backflips when you’re high? 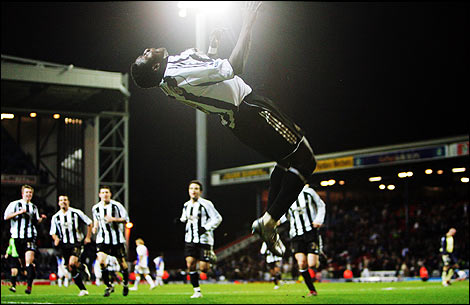 Disclaimer: The above article is presented here as a joke based on Oba M’s optimistic comments about Newcastle challenging for the Premiership title. As such, it does not seriously imply, nor does the author or Soccerlens believe, that Newcastle can actually challenge for the title Martins has ever snorted cocaine or participated in any other form of drug abuse.