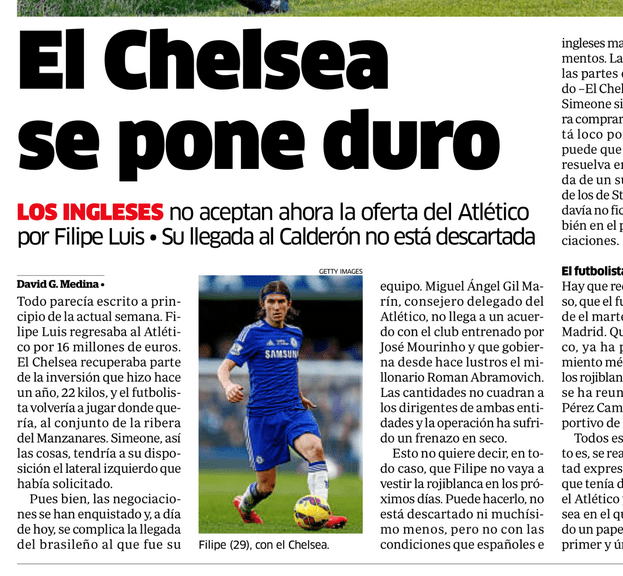 The Brazilian was pictured in Madrid earlier this week and is now one step closer to sealing his Chelsea exit.

Atletico president confirmed earlier this week that the defender will sign for the Spanish outfit and the transfer should be confirmed soon. Meanwhile, Chelsea manager Jose Mourinho has also hinted that the player will leave the club this summer.

However, there has been no official announcements and Atleti are keen to present the player as early as possible. Filipe Luis intends to start training with his former teammates again, but the deal is set to drag on unless Chelsea find a replacement for the Brazilian.

Augsburg left back, Baba Rahman has been identified as the ideal replacement, but the German outfit are playing hardball over the transfer.

In such circumstances it looks certain that Luis’ announcement may take a while, unless Chelsea decide to pay the asking price for Baba.

Atletico are rumoured to be paying 10 million pounds for the transfer of Filipe Luis, who has endured a stop start campaign at Chelsea. Despite winning the league with the Blues, the defender has been in and out of the side and never really convinced the manager with his performances.