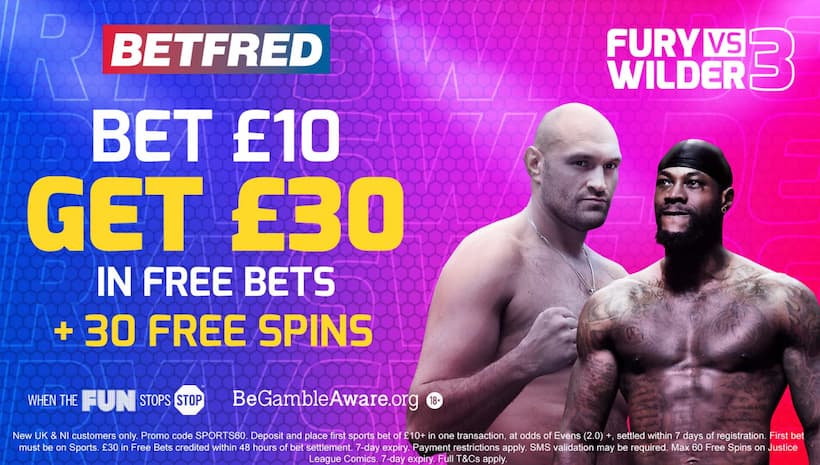 British WBC heavyweight champion Tyson Fury takes on Deontay Wilder in the final fight of their historic trilogy on Saturday, and our expert has a couple of boxing betting tips for the bout.

If you’re looking for Fury vs Wilder III betting tips, plus an exclusive free bet for sportslens readers at Betfred, read on:

As always, Betfred has boxing betting odds for just about every outcome imaginable for the Fury vs Wilder bout this Saturday night. We’ve included a select list below but head over to Betfred for the complete odds.

This upcoming Saturday will be the third time Tyson Fury has met Deontay Wilder for the WBC crown. In the previous two contests, it’s fair to say that the Manchester-born fighter has been dominant overall.

The first bout took place back in 2018. Fury had controlled the entirety of the fight, many fans had him up 8-3 going into the final round. But Deontay Wilder always had a puncher’s chance and the American proved it when he caught Fury with a stinging hook in the final moments, sending him to the canvas. The British champion was fortunate to return to his feet to beat the ref’s count, but this moment seemed to sway the scorecards dramatically and the bout was deemed a tie.

Fury certainly had the better of the second contest, too. Most had the champion up 6-1 heading into round seven, which is when Wilder’s corner decided to throw the towel in on behalf of their beaten fighter.

Based on what we’ve seen in his training videos, expect to see a much sharper Wilder in this third contest. The American looks to be in the best shape of his career; he’s moving well, and he knows another defeat to Fury will spell the end of his WBC title charge – the Bronze Bomber won’t get another opportunity.

As such, we think Fury to win but Wilder to take it all the way to the judges’ scorecards, which is what so nearly happened in the first fight, is a good bet, especially at 29/10.

As mentioned in the previous segment, Fury has dominated the two previous fights between these two boxing legends.

In Fury vs Wilder 1, Fury connected with 84 of 327 punches thrown; compared to Wilder, who landed 71 of 430 thrown, meaning the Brit connected more regularly and more accurately. Fury out-landed Wilder in nine of the 12 rounds and was en route to a win before getting caught in the final moments.

Fury was even more dominant in the second fight: after both men kept things close in the opening exchanges, Fury pulled away in rounds 3-7, outlanding his American opponent by 135 significant strikes to 54 by the time Wilder’s corner threw the towel in.

Based on what we’ve seen before, a 10/11 wager on Fury to win by any means is certainly the safest bet for the fight.

Sportslens readers who sign up for a new account with Betfred in time for Fury vs Wilder III on Saturday night are eligible to receive £30 in free bets + 30 free spins at the Betfred casino.

This means that it’s possible to bet on Fury to win by decision, or Fury to win by any method, and profit £30 in free bets no matter what the actual result of the trilogy bout is.

To claim £30 in free bets + 30 Free Spins at the Betfred casino, simply follow the steps below: