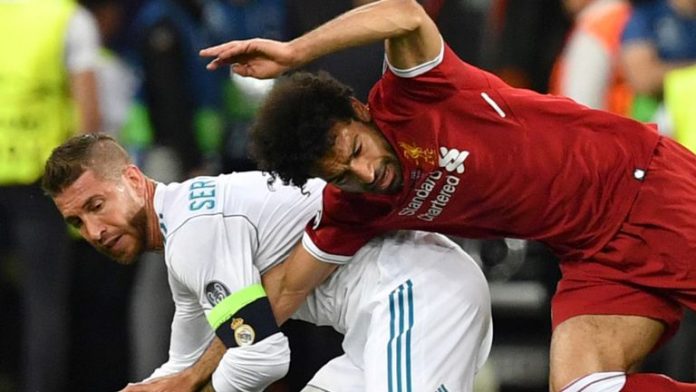 Liverpool’s chances of winning the Champions League final last season were dealt a huge blow 30 minutes into the match after Egyptian forward Mohamed Salah was withdrawn due to injury.

The former Chelsea and AS Roma man was injured by Real Madrid’s skipper Sergio Ramos after a tangle, and the shoulder injury sustained in a challenge prevented Salah from having a great World Cup with Egypt.

Many believe the tussle with Salah was malicious and one of Ramos’ dark arts, and Liverpool fans are yet to forgive the Spaniard.

The legendary defender will forever remain a villain in the eyes of everyone associated with the Anfield outfit, and Josh King’s latest comments will surely draw their ire.

The Bournemouth striker faced Ramos during Norway’s Euros 2020 qualifiers against Spain on Saturday night, and he claimed post-game that the controversial centre-back seemed a good sport and that he can’t remember coming across a friendlier centre-back than him.

“I think that I did really well against one of the best centre-backs in the world. Ramos has a reputation of being dirty and rough, but I do not remember going up against a centre-back as nice as him,” King told Norwegian publication VG (via Marca).

“I have not seen all of his matches but I think that all of his challenges were clean and he seemed to me a very good sportsman. He won some duels and I won others, I think it was a good game.”

Liverpool boss Jurgen Klopp dubbed Ramos, who also allegedly concussed keeper Loris Karius with a barge a wrestler for his cynical foul on Salah, and the German won’t agree with King.

The Madrid hero has received a European record 25 red cards in his career, is La Liga’s most sent-off player with 20 red cards and officially the most unfriendly player in Champions League history with 37 bookings to his name.

Ramos would have provoked Salah again during this season’s Champions League group stage draws after touching that same shoulder on his way back to his seat after picking up the award for best defender of the 2017-18 campaign.